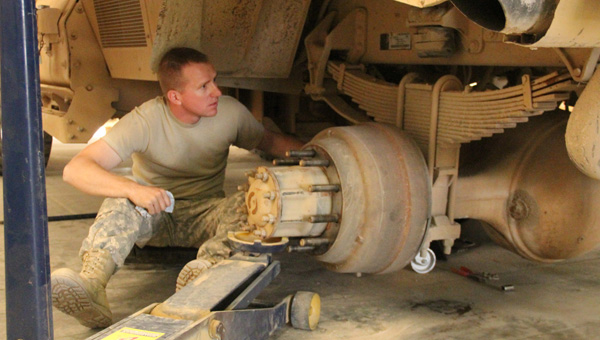 CAMP BUEHRING, Kuwait — Keeping the fleet running is one of the most important parts of missions, and it’s not an easy job. 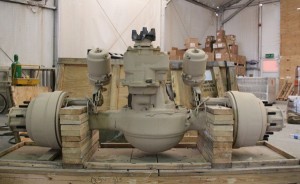 The rear axle that would replace a broken one sits in the shop down at the motor pool at Camp Buehring in Kuwait. The axle cost more than $14,000.

Since he’s attached to the Delta Company he acts as an infantryman, which includes missions into Iraq to help with cleanup.

“Originally I was an actual mechanic,” Tart said.

He operates as both at Camp Buehring and said it can be nice to switch between jobs to mix things up. He works with other mechanics on all the trucks the company uses.

“We do just about everything,” Tart said.

They recently received some MaxxPro Plus MRAPs, or Mine Resistant Armor Protected vehicles, that need some work. The shop is able to handle regular maintenance like oil changes as well as big projects like replacing a rear axle, which Tart and Staff Sgt. David Guldager, of Parkersburg, Iowa, were doing Saturday afternoon. Tart expected that replacing the axle would take about 15 hours of labor. 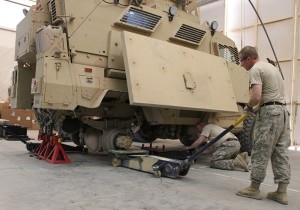 The new axle costs more than $14,000 and is so heavy it takes multiple jacks to be able to transfer it from the box to the vehicle. The broken axle was likely damaged because of all the weight put on the trucks with all the armor. The MRAPs weigh around 65,000 pounds.

“When you sit in that thing you feel safe,” Tart said.

Usually drivers report to mechanics right away when they think something might be wrong with the truck, so there’s ongoing maintenance issues to solve. Tart said they keep around 98 percent of the vehicles ready to go.

Tart grew up on a farm working on vehicles, then went to basic training and was active duty for a while. He also held jobs working on Mack trucks and at a Chevrolet dealership in Spring Valley.

With more and more trucks going into Iraq to help with the drawdown of troops and equipment, it only means more maintenance issues to keep on top of and fix as soon as possible.

“It gets kind of busy around here,” Tart said.