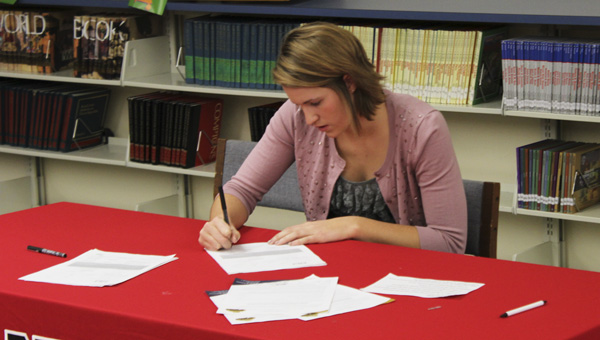 By Garrett Wampler and Andrew Dyrdal

HARTLAND — Less than a week after her high school volleyball career ended, Anna Schlaak began thinking about the future.

She is coming off of one of the top, if not the best career in NRHEG volleyball history, signed her letter committing her to play at Concordia University in St. Paul next season.

“When I got the job here at New Richland, obviously she was the first person I heard about,” said NRHEG head coach Joe Kuechenmeister. “I was extremely fortunate to walk into a player of that caliber.”

Schlaak will join a Golden Bears program that has won four consecutive NCAA Division II national championships. The team was 26-2 and the No. 3-ranked team in the Central Region as of Wednesday. The Golden Bears play in the Northern Sun Intercollegiate Conference.

“The great thing about Anna is that she’s an all-around player,” Kuechenmeister said. “She can do it all. She’s known for her ability to sky above the net and send rockets to the ground, but her passing and serve receive is nearly as good.

“I’m confident that whatever ways her coaches at the next level decide to use her, front row or back row, she’ll be more than ready to have an impact.”

Schlaak said she decided to attend Concordia in February but was also interested in the Air Force Academy and Denver University, though she didn’t receive scholarship offers from either school.

She was drawn to Concordia because of their success on the court over the past four years.

“There’s nothing to mess around with there,” Schlaak said. “It’s pretty serious.”

Schlaak added that she liked Concordia because it’s a “smaller school in a bigger city.”

While at Concordia, she plans on majoring in biology with a minor in chemistry.

As an outside hitter, Schlaak led the Panthers to a 23-7 record this season and second-place finish in the Gopher Conference. NRHEG beat Waseca and Blue Earth in the Section 2AA South Tournament before falling to Le Sueur-Henderson in the finals.

The 23 victories are the third best total in program history.

She topped the 1,000 career kills mark on Sept. 10 in a match against Minnesota Valley Lutheran at the Minnesota State University-Mankato Tournament. The feat marked her as the first NRHEG athlete to break the barrier.

Schlaak also spent time playing for the Northern Lights during the Junior Olympic season. Leading Kuechenmeister to believe that Schlaak will make an easy transition to the college game.

“The transition from the high school game to the college game is a tough one,” he said. “The fact that Anna has played with some of the most talented high school volleyball players in the state during her J.O. seasons with Northern Lights should make that transition much easier.

“Concordia is a tremendous D2 volleyball program, so who’s to say for sure if she’ll make an immediate impact. But I’ll tell you one thing — I wouldn’t bet against it.”