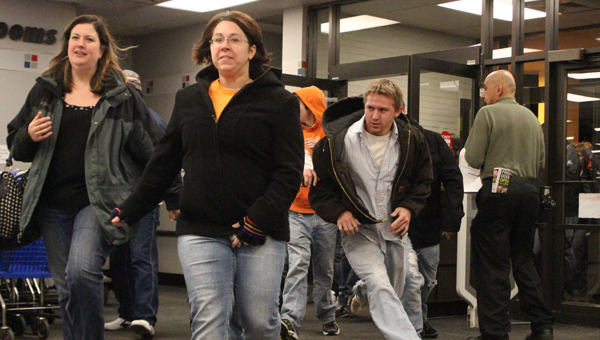 Customers pile into Shopko at midnight for the early Black Friday sale. All staff at Shopko were working either at night or at sometime today. -- Kelli Lageson/Albert Lea Tribune

Coming in to work a little before midnight on Thanksgiving Day was an adjustment, but it was necessary as retailers were opening earlier than ever for Black Friday sales.

Shopko worker Bev Evans said she hadn’t slept before coming in but said she understands why the store opens early. Shopko opened its doors at midnight and featured special sales on a variety of products. 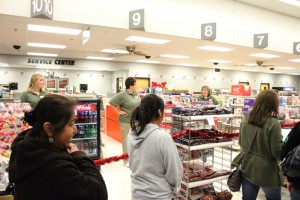 As customers shuffle into Shopko, workers stand ready to help people through the lines shortly after midnight.

She enjoys working at Shopko so staying up late didn’t bother her. Shopko Manager Bob Salloum said some co-workers were looking forward to the late-night shift more than others, but that for the most part they were excited to work.

“It’s not bad — we knew ahead of time,” Salloum said. “Shopko’s been very good so our people can have time with their family.”

Seasonally the store hired about 25 workers, and Salloum said all the workers were ready for a few hours of craziness early Friday morning after the doors opened at midnight. He said the workers are used to a busy holiday season and said the store has another big ad coming out Sunday that he expects will bring even more customers in.

One 16-year-old standing in line outside Shopko before midnight was Megan Gilbertson, a Shopko employee who would be coming in at 7 a.m. Friday to work. She was hoping to get something she’s had her eye on. 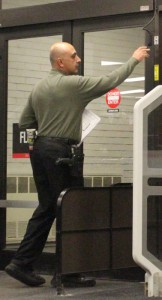 Shopko manager Bob Salloum unlocks the doors at midnight to let in the long line of customers who were waiting to snag deals from the retailer.

Some stores in town were catering to crowds who would rather get up early than stay up late, including Dunham’s Sports in Northbridge Mall. Manager Lisa Renaux said the store opened at 5 a.m. Friday with specials running until 3 p.m.

“I think it’s going to be bigger than we think,” Renaux said. “A lot of people are staying more local.”

She said she did expect that some shoppers would go to other stores at midnight and head back out for the early-morning specials as well. Dunham’s was also offering presells, so customers could buy a product and it would come in at a later date.

“We’re hoping to get a lot of people in,” Renaux said. “We do have a ton of specials.”

She thought the most popular items would be fire-proof safes with deep discounts, table games like air hockey and golf and hunting items. She said there were golf deals where a customer could buy one club and get two free. There were also big discounts on guns and other items in the hunting department, as well as throughout the whole store. 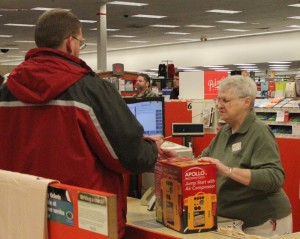 Worker Bev Evans checks out her first customer shortly after midnight at Shopko. She said she didn't mind coming in to work before midnight because it's what the customers want.

“We have a lot of things that are 50 percent off,” Renaux said. “They’re all such really good deals.”

Shopko worker Bethany Sekora was working at midnight and said it was her second experience working a Black Friday event. She had a simple plan for staying up late to work.

“I drank a lot of coffee,” Sekora said.

She did have to rearrange family plans to work, but also said she was looking forward to working even though she was missing out on shopping herself.