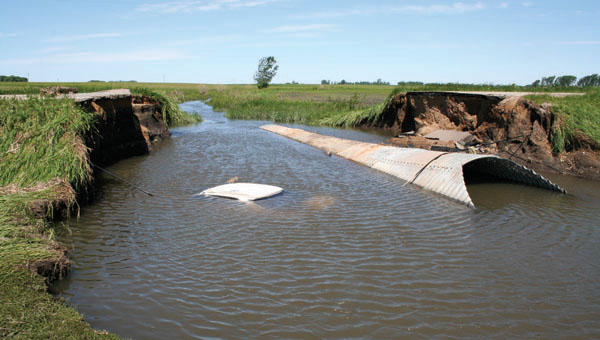 A white Mazda on the morning of June 13, 2008, remained submerged in a creek that had washed out a section of Freeborn County Road 34, after a gray Ford Taurus wagon had been pulled out. Two weeks later, another fatal crash occurred at the same washout. -- File photo

The lawyer representing Freeborn County in a lawsuit stemming from the 2008 washout on Freeborn County Road 34 is asking for a judge to determine the outcome of the case without needing a full trial.

The lawsuit is related to a crash on June 29, 2008, when a 2003 Chevy Avalanche that had six people inside reportedly drove around the right side of “road closed” barricades and crashed into an embankment in an area of road that washed out.

The washout originated during heavy storms the night of June 11. The rain raised the level of a drainage ditch that eventually flows into Orchard Creek to the southeast, and that high water washed away the culvert and roadway. The washout was on County 34 between County 21 and 19.

The driver of the crashed sports-utility truck, Charles Kenneth Dennison, was found to have a blood-alcohol level of 0.16 when measured via blood sample two hours after the crash. 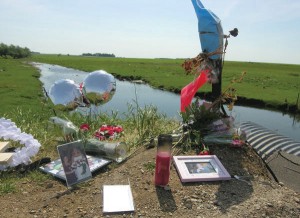 In July of 2008, photos, flowers and other memorabilia in memory of 25-year-old Kelly Jo Abrego sat by the area of washed out County Road 34 in the days after her death.

Abrego and Pechumer died as a result of injuries sustained in the wreck. Abrego is Dennison’s aunt and her three children are his cousins. Buchli is also his cousin.

Dennison is serving a two-year prison sentence related to criminal charges from the case.

Buchli, Bachtle, Dempewolf and the family of Abrego and Pechumer are alleging Freeborn County, who is responsible for the maintenance of the road, was negligible and careless.

“As a direct and proximate result of negligence and carelessness (of Freeborn County), she sustained injuries that caused her death,” state documents in Abrego’s file.

A judge already issued summary judgment in favor of Freeborn County in a separate lawsuit involving a crash on the road in the early morning of June 12 — just hours after the washout occurred — in which Albert Lea man Dale Wangen, 52, died after the car he was driving struck the same embankment and submerged in water in an area of road that washed out.

Wangen was found after authorities received a call that a second motorist had gone off the road in the washout. The caller stated that the driver of the vehicle was unhurt but unable to get to solid ground because of the rushing water.

Though that driver was brought safely to solid ground, upon rescue he informed enforcement officials that his vehicle was actually resting on top of another vehicle that was completely submerged within the washout area.

After a rapid-water recovery of the submerged vehicle, the Albert Lea Fire Department raised the second vehicle and found Wangen deceased inside.

The lawsuit involving the June 29 crash also alleges Lyle Liquor — where the friends had been for several hours late June 28 and early June 29, 2008 — illegally sold intoxicating liquor to Dennison, who was underage at the time.

“As a direct and proximate cause of the illegal sales of intoxicating liquor by (Lyle Liquor), Charles Dennison was unable to adequately protect himself or his passengers and avoid the series injuries of his passengers,” one of the files states.

Lyle Liquor is denying the allegations, according to court documents.

See videos of the washout here.