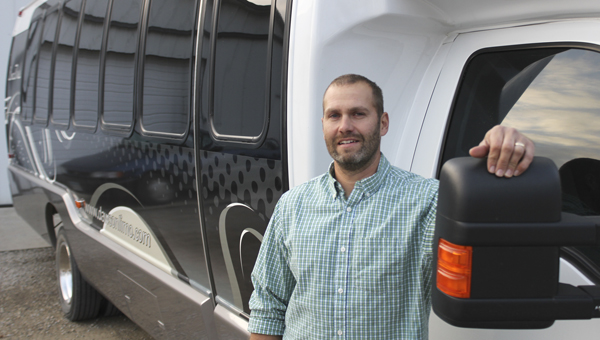 At his home south of Myrtle, Brad Schuhmacher stands next to the Ford F550 that has been converted into Dawson Limousine’s “Limo Bus.” -- Tim Engstrom/Albert Lea Tribune

MYRTLE — There is a limousine service based in the countryside of London Township in southeast Freeborn County.

But owner of Dawson Limousine says don’t be fooled by the rural Glenville mailing address. Brad Schuhmacher says the quality of his rides is better than many limousine companies found in big cities.

“I’ve got nicer vehicles than ones you’ll find in Rochester,” he said. 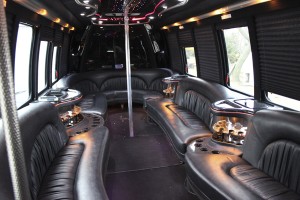 Dawson Limousine’s “Limo Bus” has a lounge interior, with room to sit in cushy comfort or stand with head space. The pole can be taken out upon request.

Dawson Limousine primarily services Albert Lea and Austin but does a lot of work in Owatonna, Fairmont, Faribault and Northfield, too.

Schuhmacher purchased Dawson Limousine in 2005 from Albert Lea band teacher Jared Dawson. The company then was one car. Now it has two vehicles. One is a stretched Lincoln Town Car that holds up to 10 people and the other is a Ford F550 converted into what Dawson Limousine dubs the “Limo Bus.” It holds about 20 people.

And the Town Car is newer than the one he bought in 2005. In fact, after doing research, Schuhmacher flew to California — the land where limousines are made — with a one-way ticket, then drove his new Lincoln home.

As much as that new car was good for the reputation of his business, he noticed a demand for more space, particularly for wedding parties. Schuhmacher’s friendly salesman in California put him in touch with a man in Kentucky who was selling a diesel Ford F550 XLT pickup that had been made into a bus-sized limo.

It gets used by weddings, for sure, but also by people who want to rent a shuttle to the Minneapolis-St. Paul International Airport.

And even by kids at elementary schools.

Halverson Elementary School recently submitted a photo to the Tribune of their students. As a reward for raising funds in the inaugural Halverson Walk-a-Thon, the school’s parent-teacher organization treated children in the class that raised the most money to a ride on Dawson Limousine’s “Bus Limo.”

Schuhmacher and his wife, Amy, live a mile south of Myrtle with their two daughters. The limo business is a side income. He is a carrier for the U.S. Postal Service in Glenville, and he helps out at his father’s farm a mile from his home.

He said he enjoys the interaction with people. He has shuttled a few celebrities, such as actor Alan Thicke and retired Vikings football player Carl Eller. And Schuhmacher particularly enjoys the reaction his limousines get from children.

“You get the oohs and ahhs from the kids when you pull into gas stations or get to do school rides,” he said. “They say things like, ‘I’ve never been in a limo before.’”