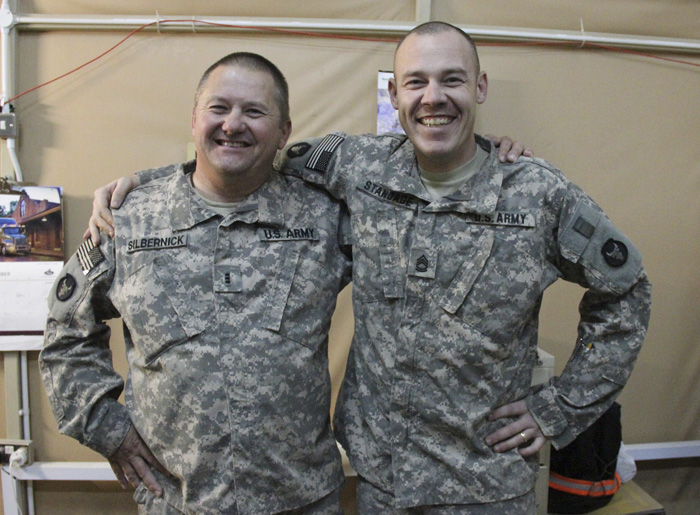 CAMP BUEHRING, Kuwait — Sgt. 1st Class Jason Standage, of Chisholm, was surprised to find out a woman who had “adopted” him as a part of Operation Minnesota Nice was the daughter of a man he works with in Kuwait.

That woman is Lynn Heckman who lives with her husband Dustin in Austin. She is the daughter of Chief Warrant Officer 3 Keith Silbernick.

“It was very ironic,” Standage said. “I’m extremely grateful to have a new sibling.”

While sitting at home sick, tooling around on the computer one day, Lynn said she started searching for ways to support local soldiers when she came across Operation Minnesota Nice. She applied and was assigned to a soldier — Standage. She wrote him a letter of introduction. Standage replied. He works closely with Lynn’s dad in Kuwait.

“It was so completely random, it was just so crazy,” Lynn said.

Standage affectionately calls Silbernick “Pops,” and they like to see what each other gets in the care packages that come from Operation Minnesota Nice. And because Standage is close to Silbernick, Lynn has found a way to stay closer to her father while he is away.

“That was kind of one of her coping mechanisms,” Dustin said about his wife using the donation program.

Lynn’s father is from Little Falls, and is part of the 1st Squadron, 94th Cavalry, part of the same infantry division out of Duluth. She said it’s hard to see him gone for his first deployment, and she will especially miss him during the holidays. But she has some comfort knowing just a little more about his situation in Kuwait, like learning about the people he serves with.

“Jason and I get along very well,” Silbernick said. “I was really surprised when I found out who she adopted.”

Silbernick is a technical expert and in charge of maintenance for the squadron and speaks proudly of his mechanics and the fleet.

The squadron is in charge of long missions into Iraq to escort troops and equipment out safely. They’ve been working even harder with the new deadline of getting everything out by Dec. 31.

“Our mechanics are doing a fantastic job,” Silbernick said.

Silbernick said the armored trucks are Caiman series MRAPs, or Mine Resistant Armor Protected vehicles, which cost about $500,000. Different shifts of 25 mechanics are in the shop for 20 hours each day, keeping 98 percent of the trucks in use.

Silbernick works at Camp Ripley full time in maintenance when back home. This is his first deployment. He is surprised how much it affects him mentally, more than physically.

“It’s different than I thought it would be,” Silbernick said.

Thankfully, he gets lots of mail and packages from home. His favorite things in packages are homemade cookies, dried fruit and nuts, magazines and anything from his family.

“They love cookies and candy of any sort,” Lynn said.

Lynn has found a new community through Operation Minnesota Nice with which she can have some fun, too.

“It’s actually really fun, and these box packing parties are all over the state of Minnesota,” she said.

Once a month, a group of 30 to 40 sponsors have a packaging party. Each person picks one item to buy in bulk. Then, the group combines its efforts and sends the packages to the Army Post Office.

“It’s a decent commitment, but I don’t mind,” Lynn said, and noted how the soldiers are always so appreciative, even though they are the ones whom others should appreciate.

Partly because of efforts like Lynn’s and other sponsors, Silbernick’s squadron receives the most mail per soldier at Camp Buehring. Thus far it has received 11,000 packages and almost 6,000 pieces of mail since it arrived in Kuwait.

Lynn encourages more people to join Operation Minnesota Nice, as some soldiers don’t receive the care packages. She also hopes to soon meet the soldier she is sponsoring who works so closely with her father.