Soldiers get mail from home 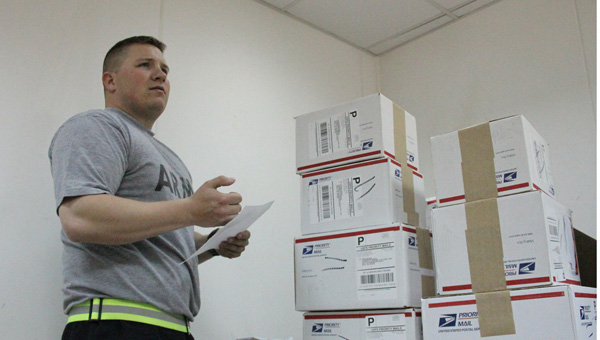 Cpl. Aaron Eggersgluss, of Delano, works Tuesday as the mail orderly for Delta Company, of which he’s a member. -- Kelli Lageson/Albert Lea Tribune

CAMP BUEHRING, Kuwait — For some soldiers getting mail or packages can be the highlight of the week.

One soldier from Albert Lea, who’s originally from Conger, Sgt. David Enser, 28, gets special mail courtesy of his father-in-law’s students at Southwest Middle School. Teacher Al Helgerson’s students have been writing Enser, who said the mail is often filled with questions about his weapons and the weather. 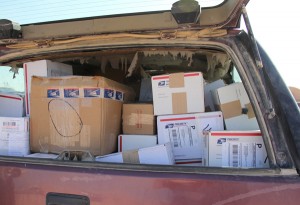 The mail truck for the 2-135 is often full of packages and letters. -- Kelli Lageson/Albert Lea Tribune

Enser said he does his best to write back and answer questions. His wife, Keli, is a substitute teacher for the class and many of the students say they enjoy having her as a teacher.

He also enjoys the letters and drawings he gets from his daughters, Gracie, 7, and Sophie, 3.

Sgt. Marc Batt, of Hollandale, with the Headquarters Company, is the battalion’s paralegal, and is often also put in charge of mail duty for the company. He picks up all the mail for the 2nd Battalion from 9 to 11 a.m. at the post office on base and brings it to a small mail room to sort into companies.

“Almost each day we get packages,” Batt said.

Letters come every few days, while packages come almost every day. Each company has its own mail orderly who picks up the mail and gets it to the soldiers. Delta Company’s is Cpl. Aaron Eggersgluss, who was picking up the mail Tuesday afternoon. Batt keeps the mail room open from 2 to 6 p.m. most days, but he does deliver some mail and packages to some officers in the company.

“I’m kind of surprised we get as many boxes as we do,” Batt said.

Batt said he does see boxes sent from family members as well as packages that soldiers order for themselves from places like Amazon.com. Also popular are packages of protein powder and products from vitamin stores, since those products aren’t available on the base. A lot of products are available to soldiers at the PX, or post exchange, which is sort of like a general store. There’s one large PX, and two smaller ones on the base.

“The PX offers so much — if we want something we just go buy it,” Enser said.

“It means a little more and it isn’t available here,” Enser said.

Letters and packages take a week to 10 days to get to Camp Buehring, depending on the time of year. It’s recommended people send holiday items by the beginning of December to ensure they get to soldiers before the holidays.