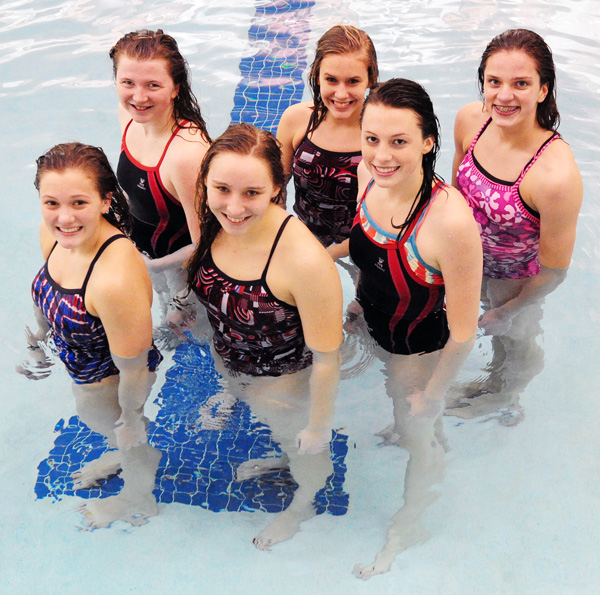 The Albert Lea girls’ swimming and diving team is sending six individuals in five events to the Class A meet on Thursday through Saturday at the University of Minnesota Aquatic Center in Minneapolis. Representing the Tigers at the state meet are, from left, front row: Karli Kriewall, Morgan Field and Galen Schulz. Back row: Kemma Bergland, Anna Andersen and Lindsey Horejsi. -- Andrew Dyrdal/Albert Lea Tribune

The Albert Lea girls’ swimming and diving team made waves around the community last season after a solid showing at the state meet.

This year they’re planning on making waves around the state.

The Tigers are sending six girls in five events to the Class A meet held Thursday through Saturday at the University of Minnesota Aquatic Center in Minneapolis. 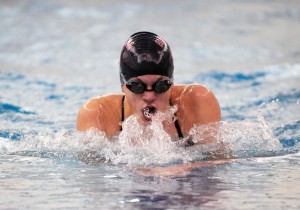 The Tigers are seeded in the top 10 in four events, and diver Karli Kriewall and breaststroker Lindsey Horejsi are expected to contend for state titles.

“This is a business trip,” Tigers coach Jon Schmitz said. “This is not a party, it’s the state swim meet.”

Last November, the Tigers qualified for state in three events and were thrilled when Kriewall placed fifth and Horejsi ninth. This season, expectations are higher and justifiably so.

The Tigers’ 200-yard medley relay team of Kemma Bergland, Morgan Field, Galen Schulz and Horejsi are seeded fifth in the Class A meet after setting section, pool and team records on Friday at the Section 1A meet in Austin. The foursome finished first in 1 minute and 51.82 seconds.

Horejsi set two section records of her own.

The eighth-grader thrashed the Section 1A record in the 200-yard individual medley set in 1998 and did the same in the 100-yard breaststroke.

Horejsi is seeded fifth in the I.M. and second in the breaststroke where she trailed the section time of the defending state champion, Kathryn Ostrum, of St. Louis Park, by just .43 seconds.

Schmitz said Horejsi is in the perfect position in the 100 breaststroke because the pressure won’t be on her but the defending champ.

“It’s going to be a great race,” Schmitz said. “She has never had a (competitive) race in the breaststroke. Her competition comes from Field.”

Field was the back end of a 1-2 punch in the section 100 breaststroke, finishing second about 3 1/2 seconds behind Horejsi and 2 1/2 seconds ahead of her closest competitor. The senior, who’s seeded 12th, said she hopes to break the top eight and earn a medal.

“My goal is to be on the podium with Lindsey,” Field said. “I need to go in and show them what I got — be strong on the turns and underwater pull outs, and the rest will fall together.”

The Tigers also expect big things from Kriewall, who as a sophomore last season placed fifth in the 1-meter dive behind four seniors.

Kriewall said her goal is to break her 11-dive school record of 369 points that she set earlier this season. Jill Johnson, the team’s diving coach, said if Kriewall broke her record it would likely place her in the top two at state.

“Top two would be nice,” Kriewall said. “I’m going to do my dives and have fun doing them. It’s no stress.”

The fifth event the Tigers will participate in at state is the team’s 200-yard freestyle relay. The team, made up of Schulz, Field, Anna Andersen and Horejsi, placed fourth at the section meet in 1:41.14. The foursome didn’t qualify by place but by beating the state cut time and is seeded ninth. Schmitz said the team’s goal is to break into the top eight.

The state meet will cap an impressive season for the Tigers, who won five dual meets after winning just one a season ago. The team finished third at the Section 1A meet and advanced swimmers to the section finals in every event besides the 500-yard freestyle.

Schmitz said the team’s success this season can be attributed to a change in culture. The Tigers added two morning practices each week and required Saturday practices when the team wasn’t at a meet.

“The way we ran the program is night and day from last year,” Schmitz said. “We did that because we have so much talent on this team, and they were able to do it. The intensity was up because they’re better swimmers and the expectations were up. We were able to train harder.”

Schmitz added that eighth-graders being moved to the high school gave the coaches an extra half-hour with that group which includes the team’s star — Horejsi.

“You’re adding almost six hours a week of training onto this whole squad,” said Schmitz of the new practice schedule. “It was quality training, a lot of good spirit, great senior leadership and top to bottom talent.”

Schulz, one of the Tigers’ two seniors headed to Minneapolis, said the team still plans on having fun at state this season but will go in with a newfound confidence.

“I do feel we need to crack down and show them that we can do this,” she said. “Last year we went up and felt like we couldn’t compete with them, and now we are one of them. We are the competition that everyone else was. That’s the difference this year. We feel we can be competitive.”

Field called the team a bunch of sisters and then some.

“I’m really excited,” Field said. “This is the best team I’ve ever been on.”