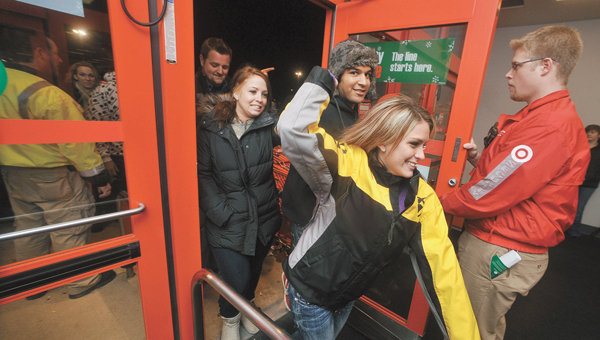 AUSTIN — The first handful of Black Friday shoppers exited Target in Austin to cheers from the crowd less than five minutes after midnight, and together they carried out seven 46-inch Westinghouse LCD televisions.

The televisions, on sale for less than $300 each, appeared to be the most-purchased item in the first 15 minutes the store was open Friday morning. Four men from Austin who were standing toward the front of the line said the TV was their main motivation for being at Target. They said they got in line at 7 p.m. — five hours before the store’s early midnight opening.

One of his three accompanying friends, David Lammers, 25, chimed in and joked that the TV is an early Christmas present to himself. 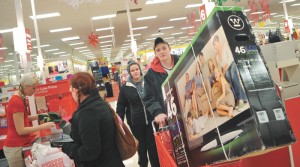 Target staff kept the doors closely guarded, only allowing about 30 customers in the store at a time to avoid trampling. The first customers sprinted inside, followed by shouts from Target staff to slow down.

Eagen said the number of people in line before the store opened exceeded her expectations. The line wrapped from the front door north toward Mower County Road 27 and west along the curb of the highway. The Minneapolis-based company had been the target of a petition asking that the retail giant to push back its opening hour to 5 a.m., rather than midnight.

“Our guests are telling us it’s the perfect time to shop,” Eagen said. “The turnout we have right now is definitely more than we anticipated. We are so excited for the midnight opening.”

Some locals showed up just to people-watch. A group of about 75 people gathered outside of the makeshift barricade of carts and watched customers entering the store.

Nate Conner and Stephanie Conner, of Austin, were two of the spectators. Stephanie said they already have most of their Christmas shopping done, but they wanted to see how busy the stores were.

“We’re here just to watch the rush,” Nate said. “It’s not worth waiting in line.”

“Cheap entertainment is a great way to put it,” he joked.

Other customers leaving the store had a variety of items, from big screen HD televisions and princess playsets to laptops and sweaters.

As for the four men who stood in line five hours — they left with two 46-inch televisions in tow.