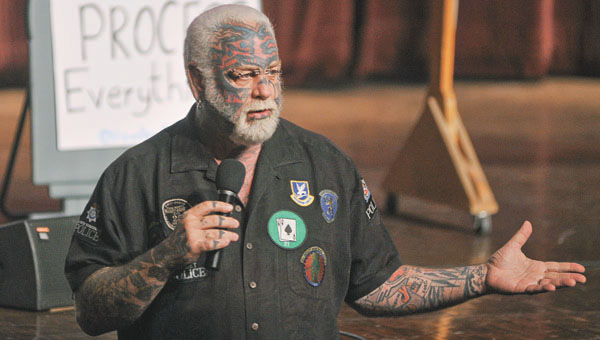 The Scary Guy asks those three questions wherever he goes. He asked about 150 ninth-graders those questions Monday morning. He did the same for more than 200 parents, children and community members Tuesday night at Knowlton Auditorium, the first of two community meetings Scary will have in town.

Scary is spreading his peaceful message throughout Austin by working with Austin Public School students and staff.

“We show them how to change the flow of negative energy,” Scary said Tuesday night.

Doing that is a lot more complicated than it sounds. By asking the three questions, Scary gets his audience to focus on bullying as a problem that affects everyone, not just children.

“This thing that we deem negative or bullying, it’s not just a kid problem,” he told the audience.

Moreover, Scary tells students how they can solve issues by ignoring hateful comments and refusing to be negative. He encourages them to participate in his Seven Day Challenge, where students can’t say negative things about people for seven days and seven nights. They also have to hug 16 people per day and do other positive acts during their week-long ordeal.

It appears Austin residents are receptive to Scary’s message. Scary praised Austin as the first community to band together to deal with bullying and negativity.

“Never in my life … have I seen so many people in one community and one city pull together to make a difference,” Scary said Tuesday. “You’re the first city on the planet to make that difference.”

The city of Austin sanctioned Scary’s efforts Tuesday as Mayor Tom Stiehm proclaimed Oct. 31 – Nov. 11 to be Anti-Bullying Week (yes, it is two weeks.) Stiehm praised Scary and the Community Against Bullying for taking a stand for the community. He had firsthand experience dealing with bullying when he was an investigator with the Austin Police Department. He told the crowd that the worst cases for him involved bullying.

“I never solved anything (to do with bullying),” Stiehm said. “Police can’t stop bullying. It has to be stopped here and at home.”

Scary will continue working with Austin students and staff through Nov. 11, spending at least one day at every school. He will spend next Tuesday and Wednesday, Nov. 8 and 9, at Ellis Middle School while a CNN news crew will document his work and conduct interviews throughout the community.

Though Scary will leave in less than two weeks, he said the work he does isn’t about him. It’s the community’s job to continue being positive and speak out against bullying and negativity.

“I’m not here to change anyone,” he said. “I don’t have that power. This is an Austin program. You’re going to have to move it forward.”