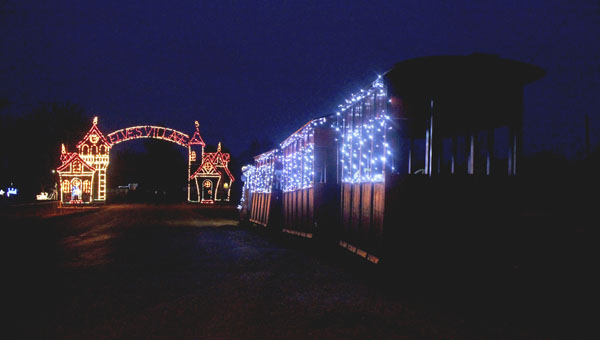 The entrance to the Austin Festival of Lights, or Elves Village as it is called, was ready to go Friday evening at Jellystone Park off of Interstate 90. -- Matt Peterson/Albert Lea Tribune

AUSTIN — What would the winter holidays be without twinkling light displays illuminating people’s homes?

One Austin resident decided she wanted to see more than just Christmas lights on people’s homes, so she has spent the last year organizing the first annual Austin Festival of Lights, a massive light display at Jellystone Campground off Interstate 90. 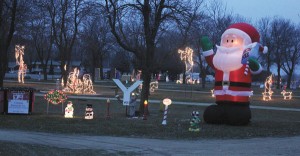 A giant inflatable, lit Santa Claus, along with displays from local businesses, is just one of the attractions at the Austin Festival of lights at Jellystone Park.

Hall set out to bring a festival of lights to Austin, and now she has 50 displays, all of which are about 400 square feet, set up at Jellystone. Some of the light displays are Christmas and holiday themed, and some are just “epic,” according to Hall’s elementary-aged son, Zach.

Zach and Hall’s other son, Brad, said one of the epic displays is a 17-foot sea monster that gives the illusion of blowing fire and wiggling its tail. The sea monster display will arrive at the festival in early December.

“That campground just glows,” Hall said. “It is truly spectacular out there. I want all the kids to be happy and giggling.”

The displays are set up so viewers can enter the campground and remain in their cars for the entire festival tour, which lasts about 20 minutes, according to Hall. The festival is open from 5 p.m. to 11 p.m. Nov. 25 through Dec. 31, but Hall said she expects some wait time because of lines.

“I can’t wait until everyone comes out and sees it,” she said. “I’ve got all sorts of stuff out there.”

At least 32 non-profit organizations and church groups will benefit from the festival, too, Hall said. Each night, a different group or organization will donate their time to collect admission and guide vehicles. Ten percent of that night’s income will go to the group as a donation. Admission is $15 for a vehicle of one to seven people, but each vehicle can get $5 off if they bring a donation like canned food or toiletries to be given to area non-profits for those in need.

If all goes well this year, which Hall is anticipating it will, she and her sons already have a plethora of ideas for next year’s festival.