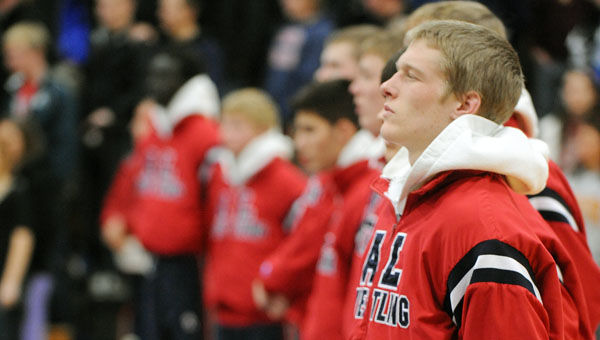 Dalton Westerlund, right, and the Albert Lea wrestling team enter the season ranked No. 9 in Class AAA. The Tigers are joined in Section 1AAA this season by third-ranked Hastings and sixth-ranked Owatonna. -- Andrew Dyrdal/Albert Lea Tribune

The Albert Lea wrestling team will have its hands full this season in the newly aligned, top-heavy Section 1AAA.

The Tigers, who beat Owatonna to Big Nine Conference and section titles last season, now face a three-headed horse with the addition of Hastings into Section 1AAA.

The Tigers have five wrestlers ranked individually in the class led by its No. 4-ranked senior, Dalton Westerlund, at 170 pounds.

Hastings also has five wrestlers ranked in the top 10 and Owatonna has six. The section’s highest-ranked wrestler is Hastings’ 220-pounder Isaac Eichmann, the defending state runner-up who is ranked No. 2.

The Tigers open its season on Saturday at a tournament in Hastings. The team will wrestle in its first conference dual on Dec. 8 with a doubleheader against Winona and Austin at home before wrestling its most important regular-season match of the year, at Owatonna on Dec. 13.