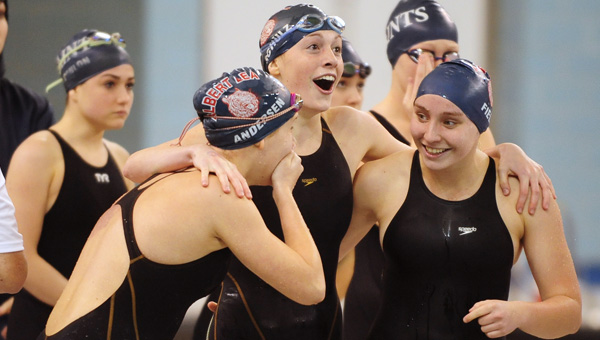 The Albert Lea 200-yard freestyle relay team celebrates on Friday after coming in sixth in the Class A preliminaries at the University of Minnesota Aquatic Center. -- Andrew Dyrdal

MINNEAPOLIS — The Albert Lea girls’ swimming team started slow but finished strong on Friday at the Class A state preliminaries at the University of Minnesota Aquatic Center.

The Tigers’ 200-yard freestyle relay and Lindsey Horejsi in the 100-yard breaststroke reached the finals, and the 200-yard medley relay and breaststroker Morgan Field settled for the consolation round.

Despite being seeded in the top five, the Tigers failed to reach the finals in its first two events — the 200 medley relay and 200 individual medley.

Heading into the 200 freestyle relay and trying to avoid a letdown, coach Jon Schmitz gave his swimmers a pep talk.

“We weren’t ready right away,” Schmitz said. “We sat them down, got them pumped up and said: ‘Listen, you guys have got to step it up and do something about this.’”

The message was clear.

The ninth-seeded relay team, which included seniors Galen Schulz and Morgan Field and eighth-graders Anna Andersen and Horejsi, set a school-record en route to a sixth-place finish in one minute and 39.5 seconds.

The top eight send the relay team to the finals and guaranteed it a medal and place on the podium.

“That was amazing,” Schmitz said. “That was the greatest swim around. It just goes to show the mental preparation. We got them ready, and everybody did their job and it added up to a great swim.”

The 200 freestyle relay was Galen Schulz’s last chance to earn a medal at state. After the team’s anchor, Horejsi, touched the wall she looked scoreboard and leaped into the air, stunned.

“We locked in a medal,” Schulz said ecstatically. “We’re going to be on that podium no matter our time. This is amazing.”

Horejsi won her heat in the 100 breaststroke in 1:05.47 and finished .57 seconds behind the defending champion, Kathryn Ostrom, of St. Louis Park.

“I felt good,” Horejsi said. “Once I have someone to race then I will hopefully get to that point where I need to beat this person and take it.”

Horejsi watched Ostrom swim in the following heat and was confident heading into Saturday’s finals.

“We got the first split the same and so I think we’ll be together the whole race it and will just come down to who touches first at the end,” Horejsi said.”

The team’s other breaststroker, Field, who was 12th entering the prelims, finished in 14th in 1:09.28. Field swam in the consolation round on Saturday.

The Tigers’ 200 medley relay team of Kemma Bergland, Field, Schulz and Horejsi, also swam in the consolation round after placing 10th on Friday in 1:53.33.

“We didn’t put it all together in that medley relay,” Schmitz said. “They’re going to go a lot faster, and it’s too bad we got stuck in the consolations. That’s just experience. Our seniors did their job, you know? That was just a rough place to be.”

Albert Lea’s diver, Karli Kriewall, also competed on Saturday in the finals. Kriewall was in 10th place after Thursday’s prelims with 227 points. Ninth-grader Bailey Dupay, of Northfield, led the diving event after Day 1 with 277.6 points.