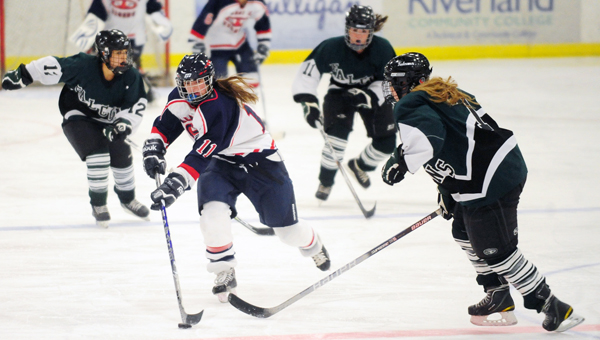 Albert Lea’s Anna Anderson races down the ice on Tuesday during the first period of a 3-1 win over Faribault at City Arena. -- Andrew Dyrdal

Faribault had plenty of chances against the Albert Lea girls’ hockey team on Tuesday night.

The freshman goalie saved 29 shots, including many from point-blank range, and lifted the Tigers to a 3-1 win in its Big Nine Conference opener at City Arena.

The Falcons outshot the Tigers 30-27, including a 14-8 advantage in the first period, but goals from 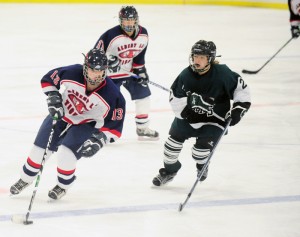 Albert Lea’s Mariah Leach (13) eludes a Faribault defender on Tuesday during the first period of a 3-1 win at City Arena. -- Andrew Dyrdal

“Katie was outstanding tonight,” Tigers coach Paul Willett said. “Frankly we didn’t give her a lot of support in there and she stepped up and played a big, big game.”

In a game of two teams looking for its first win of the season, the Tigers struck first early in the first period. Natasha Moyer slid a pass from behind the net to Pulley who scored just two minutes and 52 seconds into the game.

With 3:30 left in the second period, the Falcons went on a breakaway and fired a shot at Schwarz, who saved the shot with her pad along with the rebound moments later. After saving an uncontested shot from Faribault’s Cady Walker from right in front of the goal 1 1/2 minutes later, Schwarz finally surrendered her first goal after 20 consecutive saves.

Schwarz saved a shot from Lexus Tatge but the rebound from senior Brittany Lackore found the back of the net.

“The one goal she gave up there was absolutely nothing she could do about,” Willett said. “Faribault did a good job getting pucks to the net but we didn’t play particularly well on our end of the ice. We did a lot of standing around and watching and that’s something we’re working on.”

Schwarz saved all nine of the Falcons’ shots in the third period and the Tigers connected on two of its 11.

With 11:43 remaining in the game, Leach stole the puck in the neutral zone and scored on a breakaway over Faribault’s goalie’s left shoulder.

Trailing 2-1, the Falcons had a great opportunity to draw even with 10:26 remaining with a 5-on-3 advantage on a power-play. The Tigers kept the puck in Faribault’s zone for much of the penalty and even put pressure on the Falcons’ goalie.

After the penalty kill, Savelkoul gave the Tigers a 3-1 lead with 9:09 left in the game.

Willett said he was pleased with his team’s offensive output after scoring one goal in each of its first two games.

“Leach’s goal was just a snipe,” Willett said. “She buried that thing in the top corner and it was a great shot. Savelkoul missed on that breakaway but was able to pick up the rebound and stuff it home coming back from behind the net. We were able to actually get a few pucks to the net which we had trouble doing the first two games. When you get the puck to the net sometimes good things happen.”

The Tigers held its opponent without a power-play goal for the second time in three games this season and are 14-of-15 on penalty kills after surrendering one to Northfield on Saturday.

“That’s one of the things I’ve been really pleased with,” Willett said. “We’ve done a very good job at killing penalties, and as you’ve seen our penalty kill is very, very aggressive in our own end of the ice and we’ve done a great job with it.”