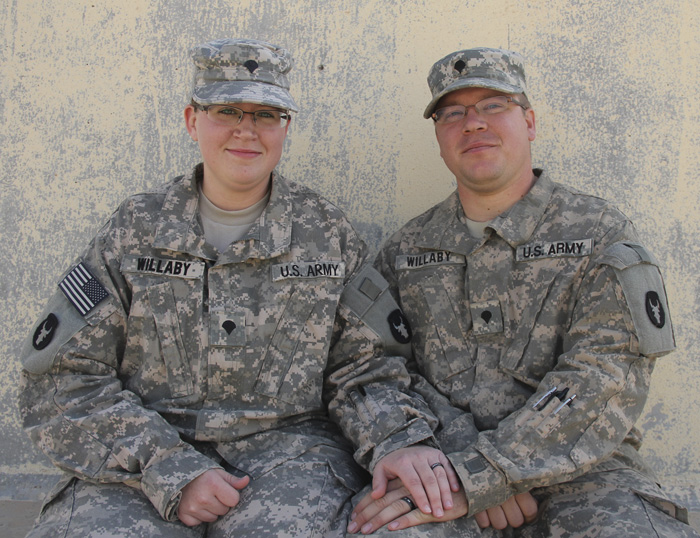 Spc. Leslie Willaby met her husband, Spc. Shaun Willaby, in the Minnesota National Guard and are deployed in Kuwait with separate companies in the 2nd Battalion of the 135th Infantry Regiment. -- Kelli Lageson

CAMP BUEHRING, Kuwait — Most people who are married and deployed with the National Guard have to spend a year away from their spouse, but that’s not the case for one special couple.

Spcs. Shaun and Leslie Willaby are both deployed at Camp Buehring, which is unusual. Shaun is a driver and gunner with Albert Lea’s Delta Company, and Leslie is in Austin’s 1135th Combat Support Company, both companies are part of the 2nd Battalion, 135th Infantry Regiment.

Shaun is originally from Emmons, and Leslie is from Kansas City, Mo., but has lived in Albert Lea with her mom. They actually met because of the Guard — they were both at Fort McCoy, in Wis., and were on a bus taking soldiers to Camp Ripley when they met and started talking.

“We had to go to Ripley for the Soldier Readiness Program,” Shaun said. “On the bus we got to talking.”

That was in March of 2010 during a drill weekend. Then they began talking more and more over the coming months and hanging out. Shaun said he wanted to propose and he did so in April of 2011. Leslie said she said yes immediately.

Then Shaun was called up to deploy, and left at the end of May. Leslie’s unit arrived in Kuwait later, and though they applied for housing together they weren’t able to get it so they live in separate rooms.

“We call this our honeymoon,” Leslie said with a laugh.

They’ve talked about taking a honeymoon when they get back from the deployment but don’t have set plans yet. As much as they can they try to see each other while on base.

“We went to the USO tent and recorded four books,” Shaun said.

They were able to record themselves reading books and sent those to their sons. They each have a son from previous relationships; Shaun has Carter, who’s 6, and Leslie has Gabriel, who’s 1. Carter stays with his mom and Shaun’s parents, and Gabriel stays with Leslie’s mom while they’re deployed.

Since they aren’t allowed in each other’s rooms they go to movies at the movie theater on base or go to the gym together.

“It’s a big morale booster to be able to talk to someone you’re close to,” Leslie said.

They plan to make their home together in Glenville when they return. Shaun works at Cargill in Albert Lea and is about halfway done with a college degree in law enforcement. Leslie works at KFC in Albert Lea and has almost completed a liberal arts degree at Riverland Community College. They said living separately and working different shifts can be frustrating.

“It makes it challenging to plan to do anything,” Shaun said.

While there are struggles, they are happy to be here together. They even got matching wedding rings for the deployment that they knew might get beat up so they didn’t have to wear their actual rings. They’re excited to make their home together after the deployment, and Leslie said she probably won’t stay in the Guard for the long haul, though Shaun said he’s still considering staying with the Guard.