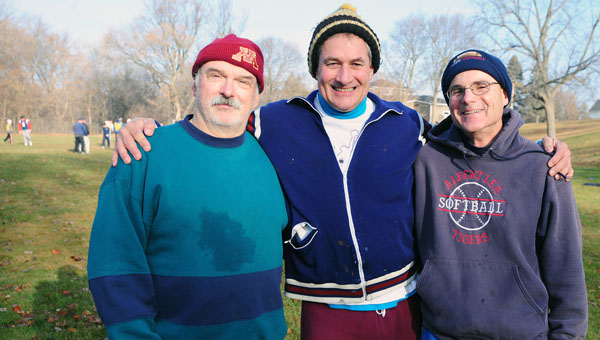 The weather was 50 degrees and sunny on Thanksgiving morning when the 45th annual Turkey Bowl kicked off at lower Abbott Field in Albert Lea. 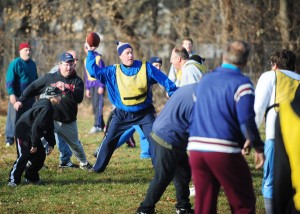 Twenty-eight men and one woman joined in on the touch football game, which marked a milestone for a game that began in 1966.

The Turkey Bowl was born when at 9 a.m. that Thanksgiving Day, Paul Wendorff, along with his brothers Rich and Jim, were told to get out of the house while his mother was cooking the holiday meal. The brothers made a phone call to their neighborhood buddy, Rick Harves, and they agreed to organize a football game.

“The mid-’60s were boom times for Albert Lea economically,” said Wendorff, who graduated from Albert Lea High School in 1971. “And athletically, ALHS was pumping out several quality athletes and teams.”

According to Wendorff, 58, many of those athletes lived in a 3-by-6 block neighborhood bordered by Fountain Street on the south, Vine Avenue on the east and Abbott Street to the north and west. Within 20 minutes of the call, 25 neighborhood boys were at lower Abbott Field to play in the first Turkey Bowl.

Forty-five years later, three original members were still playing. Wendorff was joined on Thursday by Harves and Jim Nielson, and since 1966, the rules of the annual football game have stayed the same: one point for a touchdown, two-hand touch and you can pass to and from anywhere on the field at all times. The games last about two hours. 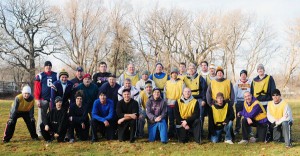 “We had so many darn good athletes we got bored by the original rules,” Wendorff said.

Wendorff vaguely recalled missing only one Turkey Bowl since its inception and said Harves and Nielson may have missed one, too. On Thursday, Wendorff, who now lives in Eden Prairie, stopped in Albert Lea just to play football before joining his family in Byron in the afternoon. But he said others have traveled further.

“Some guys living in Chicago and Michigan have flown back,” Wendorff said. “It’s a pretty big deal.”

Wendorff said the neighborhood friends who played in the first Turkey Bowl grew up playing pickup games together including baseball and basketball.

“We hung together through ALHS, were in weddings, celebrated funerals and have maintained a bond based on athletic achievement and lifelong friendship,” Wendorff said.

He said the group, which included kids with nicknames like Black Dog, Bang Bang and Muncies, even hopped a train one afternoon and rode to Wells to play the town’s VFW baseball team in a sandlot game.

“It was a time in this neighborhood where you burned leaves in the street gutter, dogs ran free, old cars were worked on in driveways, working out for a sport was No. 1, and ALHS letter jackets were worn proudly,” Wendorff said.

Nowadays the Turkey Bowl is played by many of the first athletes’ sons who live in Albert Lea and is organized through email and word of mouth.

Wendorff said Thursday was one of the nicest days they’ve had and recalled having to snowblow the sidelines in other years and play in three feet of powder. He attests weather could never slow this tradition.

“Even in snow we’ve still played,” Wendorff said. “Thursday was a blessing.”