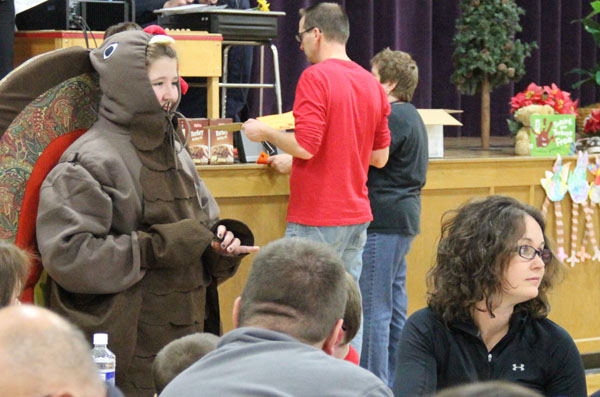 It’s a time for families to gather for a fun, free event and possibly win foods to supplement their Thanksgiving dinner.

This was the third year for Hawthorne Elementary School’s Turkey Bingo event. A first-grader, Keygan, came with mom Shelly Wangen, step-sister Addi, dad Steve, and step-mom Cheyenne Lundak. They won one of the 56 turkeys Tuesday night. Lundak said the school encouraged the whole family to come to the event.

“It’s good to get the kids with other kids,” Lundak said.

Lundak and her husband are on the parent-teacher organization and said they helped call around to area businesses to get donations for the event. They said many businesses wanted to donate. Organizer and teacher Heather Leach said there were more than 40 businesses who supported the event in one way or another. 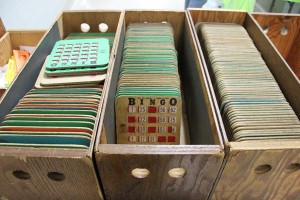 “It’s really exciting to see all the businesses in town supporting the school,” Leach said.

The event started at 6 p.m., and all the turkeys were gone within the first half hour. There were also boxes and boxes of stuffing, pies, lots of cans of vegetables and other foodstuffs that were given out.

“It’s just a fun event to get everybody together,” Leach said.

Leach said there was also some entertainment in between all the bingo games, where students and teachers were putting on short skits, which brought an aspect of education to the fun event.

“We’re also having a coat drive,” Leach said. “So parents can donate coats, and families that are in need of coats can go and get them.”

School board members, teachers, firefighters and police officers were just some of the many bingo callers Tuesday night. Another organizer, Nikki Worman, said they had the most staff helping with the event this year.

“I like that it’s a free event that all of our students and families can come to and have fun,” Worman said.

There were also four full Thanksgiving meals given out as part of a raffle. The gym at Hawthorne was so full that folding chairs were added to the outer edge of the gym around all the tables. Leach said she liked that parents are able to meet other parents and children to create more of a community feel at the school.

“Parents are able to build relationships with each other,” Leach said.

Principal Karen Zwolenski, who’s new to the district this year, said she was enjoying the event and glad to see how many people showed up.

“It’s such a fun family thing to do,” Zwolenski said.