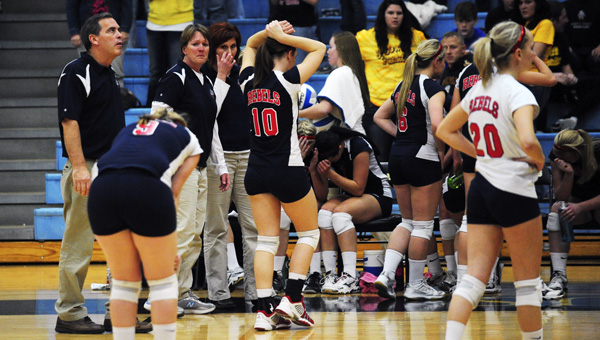 United South Central heads back to their bench after suffering a loss in the Section 2A final to BOLD High School 3-0. -- Garrett Wampler/Albert Lea Tribune

ST. PETER — Momentum and survival have been the driving forces behind the United South Central girls’ volleyball team’s playoff run deep into the Section 2A tournament.

On Saturday night at Gustavus Aldolphus College in St. Peter, the Rebels would need those forces again on an emotional roller coaster of ups and downs in the section final. This time against the North subsection champions, BOLD high school, with a section championship and a trip to the state tournament on the line.

Even with the Rebels (16-12) holding a firm lead late in the first two sets, the BOLD Warriors were able to mount two comebacks and close out the third set 25-10 to sweep the Rebels in the final. 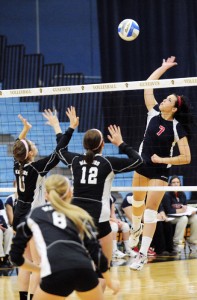 Allie Voigt attempts a kill against the Warriors. The senior finished the night with 15 kills.

“I’m extremely proud of these kids,” Rebel head coach Rick Hotzler said. “From where we started at the beginning in September to where we are now has been leaps and bounds.”

The Rebels, winners of their last seven matches, looked almost unstoppable at the beginning of the night posting an early 8-2 lead in the first set behind the play of senior Allie Voigt and sophomore Lizzy Leland.

BOLD would find a way to close the gap in the middle of the set behind their aggressive front line hitters Nikki Neisen and Tyann Caspers. Tara Bauman helped extend USC’s lead to 20-14, but the Warriors would take over, outscoring the Rebels 9-3 in the closing points, tying the game at 23.

After a Voigt service error, the Warriors served up two quick aces by Baylie Kubesh to close out the set, 27-25.

Even after they dropped the first set, the Rebels’ weren’t ready to surrender.

“All I tell them is ‘I hope your not done’ and I tell them what I want them to do,” Hotzler said about his messages in between sets and during time-outs. “They’re the ones that keep telling me there not done.

With a renewed set of energy in the second set, the Rebels worked their way out to a 22-15 lead. Voigt, freshman Anissa Janzig, Leland and Bauman were able to keep the Warriors front line under control. 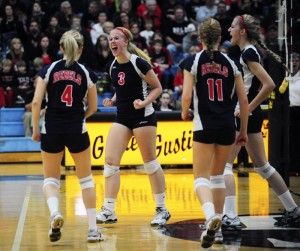 Tara Bauman (3) celebrates after scoring a point during the second set.

But then BOLD went on an eight point tear, before the Rebels’ could answer and by then they couldn’t stop the bleeding. USC surrendered the second set 25-23 to the Warriors.

“They started tipping and that’s what hurt us,” Hotzler said. “We had trouble stopping that quick middle. We don’t see that much during the year. We see it, but not enough.”

Caspers and the Warriors turned the tables on USC in the third set and took a quick 25-10 decision to close out the game and the Rebels season.

“It has been so incredible to be a part of this team,” Voigt said. “We’ve grown together as a family so much and we’ve accomplished things that we never thought were possible.”

Heading into Saturday night’s section final, the Rebels had not lost a match since Oct. 6. Their last victory came in a five set thriller on Thursday night. The No. 3-seeded Rebels trailed 2-9 in the fifth set, only to rally past the top seed in the south region, Lake Crytal-Welcome Memorial, for the subsection title.

“They didn’t think they were done Thursday night,” Hotzler said. “They knew we weren’t done.”

“They’re a tremendous group. All of them, not just the seniors,” Hotzler said. “This team has a certain chemistry that I haven’t seen in any team that I’ve coached in a long time.

“That is what made these guys so special and led to their success.”