WELLS — A student from United South Central High School’s FFA team was named a national award winner at the national FFA convention that was held Oct. 19-22 in Indianapolis, Ind. 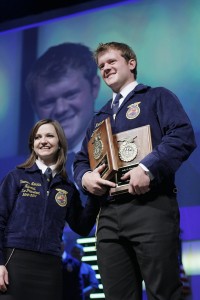 Jake Knutson, 19, graduated from USC and now attends North Iowa Area Community College in Mason City, Iowa. He competed with three other national finalists for the Grain Production Placement Proficiency Award. In addition to the award, he won an agricultural seminar trip to Costa Rica in June of 2012.

“I was honored to be named the national award winner,” Knutson said. “For me it was kind of a big relief to find out how I did.”

Knutson, who is the son of Jim and Julie, of Hartland, began his agricultural project years ago by working on the family crop farm. He has been involved more and more in the family operation over the years and can operate all the equipment needed to plant, till and harvest crops.

Last May, Knutson won the Minnesota State FFA award for his project and was named a national finalist in July. At the national convention he was interviewed by a committee of agricultural industry representatives.

Knutson said he wanted to thank sponsor Pioneer Hi-Bred for supporting FFA. Knutson will continue to be a member of USC’s FFA, led by Dan Dylla. He said Dylla has some other projects in mind for him.

“I still have a few more years in FFA, he wants me to keep going,” Knutson said.