USC presents ‘The Wizard of Oz’ 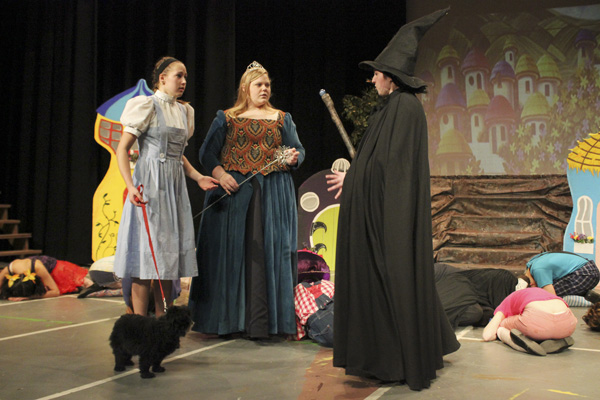 Munchkins hide when the Wicked Witch of the West (Erin Bias) appears on stage Wednesday during dress rehearsal for “The Wizard of Oz” at United South Central School. Glinda, the Good Witch of the North (Emily George) informs the Wicked Witch that a house has landed on her sister while Dorothy (Hannah Goemann) and Toto watch. -- Tim Engstrom/Albert Lea Tribune

WELLS — There are high school, middle school and elementary school students acting, singing and dancing in United South Central School’s production of “The Wizard of Oz.”

And a little dog, too. 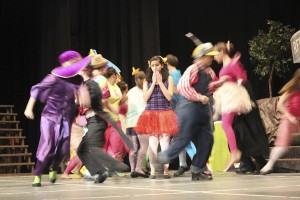 When one of the Munchkins sneezes, the others scatter Wednesday during rehearsal at United South Central. The show opens Friday.

Plus students are doing the lights, set, props and choreography.

Because so many cast and crew members were involved in so many school activities, director Clayton Miller had to move the show one week later. USC has a reputation of good theater it wants to uphold.

“The extra week has made a difference,” Miller said. “We are getting into sync.”

The USC production of “The Wizard of Oz” debuts at 7 p.m. Friday in the school auditorium. Miller expects a packed house.

“It’s a wonderful, classic tale that everyone is familiar with,” he said. “I remember clearly as a child I couldn’t wait for it to be on TV.”

The production overcomes several obstacles, such as the small stage and the limited lighting, and it does it with some bright ideas, such as using lights to make the Yellow Brick Road, dry ice machines for smoke and a movie screen for part the backdrop. And the community members have drummed up impressive costumes from far and wide, Miller said.

“For a school this size, the theater productions are quite big,” he said. “The community takes pride and rallies behind us.”

Miller keeps his expectations quite high for the students because the communities in the USC district get behind plays. In turn, he challenges the actors to develop characters and make them relatable to the audience. 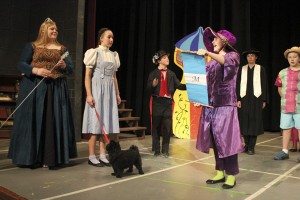 The Munchkin coroner informs Dorothy and Glinda that the Wicked Witch of the East is legally dead.

Dalton Farley says he makes his character, the Lion, relatable by doing his best to be like the one in the 1939 film. He’s watched the movie seven or eight times since the start of play practice.

“It was my favorite character when I watched the movie as a kid,” Farley said. “It was the part I was wanting when I tried out for the play.”

Brian Klein has enjoyed playing the Scarecrow. He even went so far, in the early days of play practice, to hold tennis balls in his armpits to make sure he gets his arms from his body, not at his side. After all, he is a lanky scarecrow.

By the way, it isn’t easy working with a dog. It can be unpredictable, said Hannah Goemann, who plays Dorothy.

Toto is the pet of Steven and Kim Jacobson of Bricelyn. His true name is Einstein, and he is a 9-year-old Shih Tzu-Pomeranian mix. He is making his stage debut.