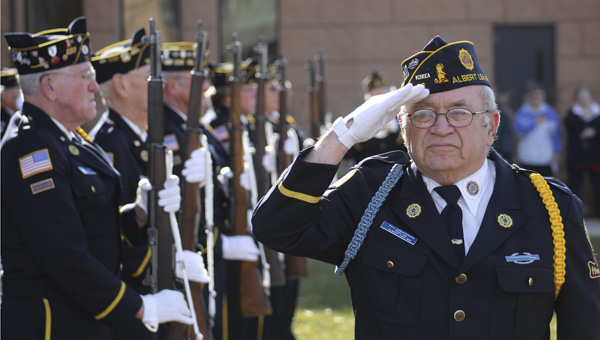 Friday was a time for reflection in Albert Lea. 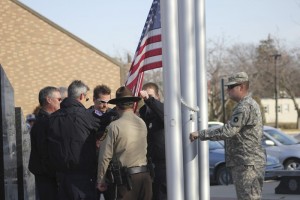 Residents reflected on the sacrifices made by local veterans. In turn, the veterans honored the hard work local emergency medical technicians, firefighters and police do every day as first responders to emergencies. And they showed their gratitude by including them on the annual Veterans Day ceremonies.

Veterans groups marched from the American Legion Post 56 to the Freeborn County Courthouse, where they recognized the 10th anniversary of the Sept. 11, 2001, terrorist attacks.

“There are very few people who run toward danger when something happens,” said Veterans of Foreign Wars Post 447 Adjutant Greg Sundholm. 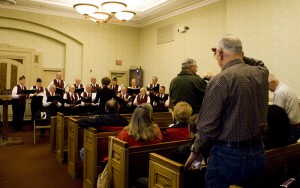 Bill Lehman, a 21-year firefighter, knows the sacrifices servicemen make every day. He also has a connection with 9/11, as he was at the 10th anniversary ceremony in New York. He felt honored to be part of the local Veterans Day celebrations this year.

“It’s an unsung job that we do,” Lehman said. “We don’t expect thanks for it. It’s nice to receive the attention.”

While veterans fought for our freedoms, their families fought a different kind of battle at home: Taking care of things and worrying for their husbands, wives, fathers, mothers, sons and daughters.

“You always, always have a home,” Tribune Publisher Scott Schmeltzer told veterans at the Veterans Day ceremony Friday. Schmeltzer was the speaker for the annual program and received the Defender of Freedom award. He felt honored to be this year’s speaker, but said the real heroes were the men and women who served and who continue to serve their communities and country.