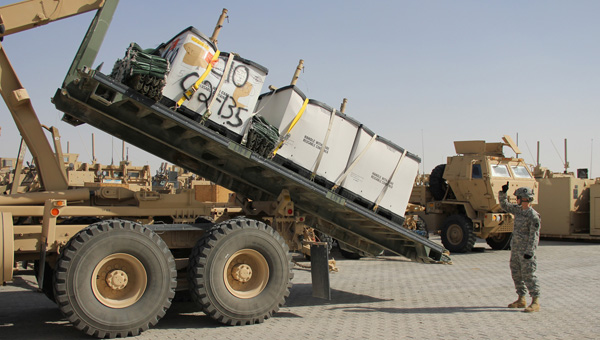 CAMP BUEHRING, Kuwait — Austin’s 1135th Combat Support Company has quite a few different kinds of jobs for soldiers, but many of them are learning how to operate all the vehicles in their time in Kuwait. 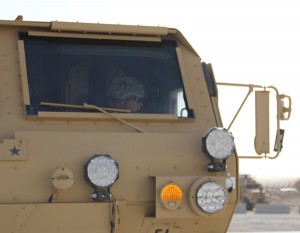 Spc. Nicholas Mitteco, of Coon Rapids, checks his side mirror for directions from Spc. Amy Fry Wednesday at Camp Buehring in Kuwait.

The job of a support company is to have as many different kinds of supporting jobs for the line infantry as possible, including mechanics of all kinds of vehicles, cooks, fuelers, drivers and more. Because not all of those jobs are needed at Camp Buehring, some soldiers are getting trained in other specialties.

Spcs. Amy Fry, 24, and Angela Eagan, 23, are both drivers for the 1135th and enjoy working together. Fry, of Grand Meadow, said being a driver is much different from her civilian life. Eagan, of Ham Lake, agreed and said neither expected to be doing what they’re doing.

“It’s a good experience,” Eagan said. “People don’t expect it so it’s fun to talk about.” 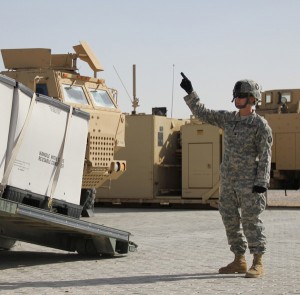 The military has its own set of hand signals for backing up trucks.

“Our company’s transportation so I could become a driver,” Buchan said. “They keep us busy, which is better than sitting around with nothing to do.”

They’ve also been trained to be Combat Lifesavers, which is a non-medic soldier with moderate emergency skills. Another job in the company is the fueler, which Spc. Jonathan Sundquist, 28, of Winona, does.

“I typically would fuel convoys on a convoy stop,” Sundquist said.

He’d also set up fuel points for incoming and outgoing convoys. He’s trained in Hazmat safety, which would help in the event that some fluid is spilled.

“There are procedures to clean it up,” Sundquist said.

Because there are contractors who take care of the fueling needs, he’s been on truck driving missions around Kuwait as needed. He’s helped transport gear from site to site, and has seen Camp Virigina, Camp Arifjan and Camp LSA, as well as a Kuwaiti naval base. 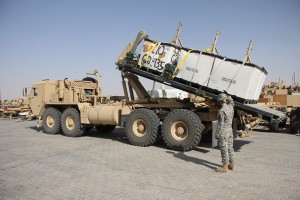 Spc. Amy Fry keeps a lookout Wednesday while driver Spc. Nicholas Mitteco picks up a pallet during a training exercise.

On Wednesday, some of the soldiers of the 1135th were training on a vehicle that has the capability of picking up and putting down a long, flat pallet. Sgt. Joshua Vandekamp, originally of Hollandale, is the squad leader in charge of training and said there are many hours of training and tests before soldiers can operate certain special vehicles.

Because there’s so many different jobs in the 1135th, some of the soldiers who were drivers, mechanics or machine gunners were attached to other units.

“We have a little bit of everything,” Eagan said. “They did take some of our guys to line infantry.”