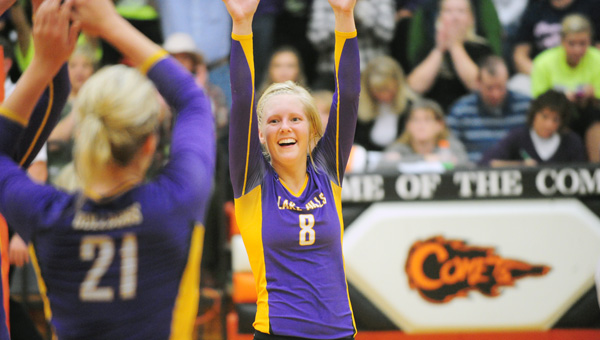 Lake Mills volleyball setter Morgan Fjelstad (8) celebrates with fellow senior Josie Brackey (21) on Tuesday night after winning a point in the final moments of a 3-1 win over Sumner-Fredericksburg in the Class 2A Region 6 finals. -- Andrew Dyrdal

Bulldogs headed back to state tourney

Lake Mills volleyball capped a perfect regular season with a second consecutive trip to the state tournament on Tuesday night after beating Sumner-Fredericksburg 3-1 in the regional finals in Charles City. 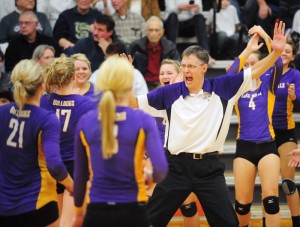 23 kills and Shelby Kuper had 14 to lead the unrelenting Bulldogs to its 44th and biggest win of the season. Lake Mills heads to Cedar Rapids as the only undefeated team in the state.

“This is unbelievable. To go back-to-back is awesome,” said Bulldogs coach Jim Boehmer, who high-fived fans throughout the stands following the win.

The Bulldogs won the first-set match convincingly over Sumner-Fredericksburg but, like its semifinals match against Forest City, dropped the second for only its fourth loss in 106 sets this season. Lake Mills regroup and won the final two games 25-15, 25-15.

“My girls surprised me tonight,” Boehmer said. We elevated our game … and every time we’ve lost a set we’ve responded with great play — that’s a testament to a group of 16-, 17-, 18-year-old kids.”

The Bulldogs closed the regional tournament with dominant wins over talented teams. Lake Mills swept West Fork in the quarterfinals, a team looking for its 28th win of the season, before beating rival Forest City (28-13) in the semis for a fourth time this year.

The Bulldogs’ win over Sumner-Fredericksburg was its most impressive. The Cougars were ranked fifth in the state and had only 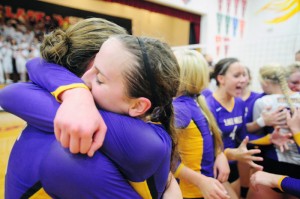 Lake Mills senior Catherine Adams, right, hugs a teammate after advancing to the state tournament with a 3-1 win Tuesday over Sumner-Fredericksburg. -- Andrew Dyrdal

Lake Mills beat Sumner-Fredericksburg in the regional finals last season but the familiar situation didn’t provide any comfort to a nervous coach.

“I was extremely scared to be totally honest with you,” he said of the finals matchup. “Sumner-Fredericksburg’s better than they were last year all around.”

Lake Mills never trailed in the final set and its fans were on their feet after back-to-back kills by Brackey put the Bulldogs on top 20-11. Brackey notched three more kills to give Lake Mills a 23-12 lead, and the Bulldogs won after a kill by junior Kelci Larson was blocked out of bounds.

Kuper and Morgan Fjelstad fell to their knees while Boehmer, who’s often the most emotional person in the gym, sat quietly and looked on.

“We’re really tough, and our girls can play,” Boehmer said. “We’ll get back to work when we get home and enjoy this moment.”

Kuper added a change of pace alongside Brackey on the left side of the court. She had four kills in the final game. 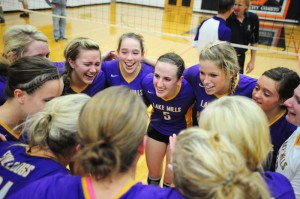 Lake Mills senior Catherine Adams, right, hugs a teammate after advancing to the state tournament with a 3-1 win Tuesday over Sumner-Fredericksburg. -- Andrew Dyrdal

“It’s absolutely amazing,” Kuper said. “Going to state last year was overwhelming and now being a senior and being able to step out onto that blue court, look up and see everybody and have that opportunity is awesome.”

The Bulldogs got off to a fast start in Game 1 and built a 6-1 lead after the Cougars’ MaKaya Hennige’s kill attempt went long. Lake Mills later rattled off eight straight points to go up 16-4 and forced Sumner-Fredericksburg to call its second timeout of the set.

When asked if the Bulldogs surprised the Cougars out of the gates:

“I think we did,” Boehmer said. “I think their plan was: We’re athletic, we’re taller, we’re bigger, let’s just power over them.

“Because of the way we started with high energy, high emotion through the first set, in their minds was a little bit of ‘Wow, Lake Mills is better than we even though they might be.’”

The Bulldogs went on to win Set 1 25-12 but trailed early in the second. 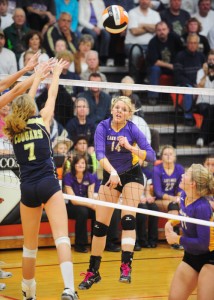 After falling behind 6-3, Lake Mills trailed until pulling ahead 14-12. From there, Sumner-Fredericksburg rattled off five straight points and eight of 10 to go ahead 20-16 and force Boehmer to call the first of two timeouts during the game. The Cougars went on to win 25-21.

The Bulldogs trailed the Cougars 6-3 in Game 3, too, but went on a 22-9 run to close out the set for a decisive win. Lake Mills then cruised in the final game.

Last season, the Bulldogs advanced to the state tournament under the radar and surprised teams with their finals berth.

This year they’re going with a target on their back.

“We’ll be the No. 2 seed and people are going to love to knock you off,” Boehmer said. “Everyone’s going to want to come at you.”

On the opposite side of the bracket is top-seeded Western Christian (47-1), who the Bulldogs were swept by in last season’s state championship match.

Kuper said the Bulldogs will stay level-headed during the tournament.

“We have to go out there and we have to play our game and not anybody else’s,” Kuper said. “We have to keep our momentum up, our energy, our emotion. We just need to step out there and play how we play.”

And how do they play?

“It’s about winning,” Boehmer said. “The seniors we have on this team are extremely competitive. They get mad in practice if I somehow cheat for the other team and I love it and feed on that mentality.”

Despite the team’s desire to win, he can hardly believe the Bulldogs have won 102 of 106 sets this season.

“I would have lost a lot of money if you would have wanted me to bet on that at the beginning of the year, Boehmer said.”