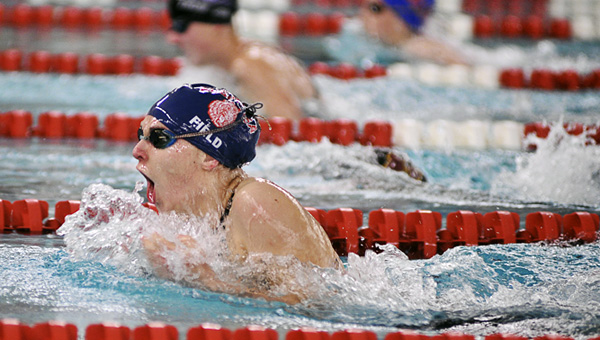 Albert Lea’s Morgan Field swims the breaststroke portion of the 200 medley at the Section 1A Swimming and Diving Preliminaries Wednesday at Ellis Middle School in Austin. -- Eric Johnson/Albert Lea Tribune

AUSTIN — Jon Schmitz couldn’t ask for much more out of his team after the preliminary day of the Section 1A Swimming and Diving Championships.

The Albert Lea Tigers qualified at least one individual and one relay in the final heat of every event except for the 500-yard freestyle on Wednesday — and even in that event two swimmers will score points in the consolation final. 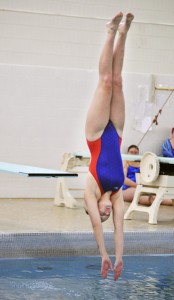 Albert Lea’s Karli Kriewall makes her first dive at the Section 1A Swimming and Diving preliminaries Wednesday at Ellis Middle School in Austin.

Several swimmers, both veteran and rookie, dropped time in their events, totalling 23 best times of the 32 swims by the Tigers on Thursday.

“The things we were really strong in, the individual medley and the breaststroke, we just crushed,” Schmitz said. “I’m very happy with those performances.”

Lindsey Horejsi led the Tigers with first place performances in the 100-yard breaststroke and the 200 I.M.

In the I.M., Horejsi conquered the course in two minutes and 14 seconds and in the breaststroke she fell just shy of the section record with a 1:06.51.

“Lindsey is just qualifying and we expect her to be record breaking when it comes to the finals,” Schmitz said.

Senior Morgan Field and eighth-grader Bailey Sandon will join Horejsi in the championship final heat on Friday they finished seventh and eighth, respectively.

Field also had a stellar performance in the 100 breaststroke, dropping nearly three seconds off of her seed time. She finished in 1:08.93, giving her the second seed heading into the event finals behind Horejsi.

Eighth-grader Samantha Nielson also dropped significant time in the event, more than four seconds. Her 1:13.48 was good enough to give her the sixth seed in the finals.

After a poor start to the diving prelims and semifinals, junior Karli Kriewall was able to rebound to place fourth heading into the final three dives on Friday with a score of 206.40.

Kriewall had a nearly perfect dive on her third attempt but hit her heel on the board during entry limiting her to a 12.65 score.

“That was really stressful,” she said. “I honestly don’t think I’ve ever had a meet that stressed me out that much.”

Kriewall was able to recover and is in position to qualify for the state meet.

“She had to fight through it. She’s a competitor and she did a great job.”

Kriewall will be joined in the one-meter diving finals by sophomore Brianna See-Rockers.

See-Rockers tallied a score of 157.20, good enough for the final slot in the championship round. 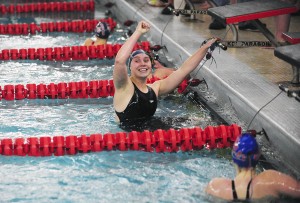 Schmitz expects faster results on Friday and even a few records.

“On Friday I really expect we’ll have two relays go to state,” Schmitz said. “We could see two school records in those relays.”

Those two relays are the 200 medley relay, which finished in second place in preliminaries and the 200 freestyle relay.

The medley relay of Kemma Bergland, Field, senior Galen Schulz and Horejsi will have to be at their best to topple St. Peter. In prelims, St. Peter swam a 1:53.30 while Albert Lea was able to draw in a 1:53.85.

The other relay, led by Schulz, Field, Anna Anderson and Horejsi will represent Albert Lea with a fourth place showing in prelims.

Albert Lea will return to the home pool of the Austin Packers on Friday night for the Section 1A swimming and diving finals. The meet is slated for a 7 p.m. start.