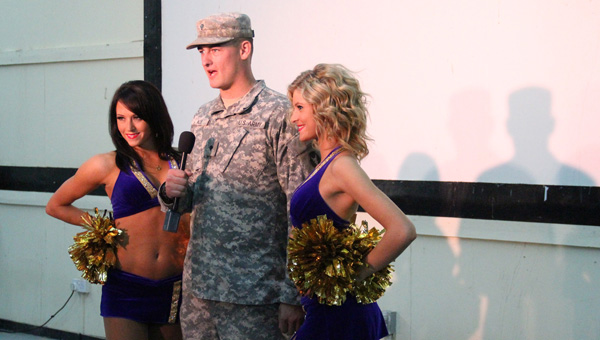 Spc. Trevor Kolb, of Austin and the 1135th Combat Support Company, stands with Vikings’ cheerleaders Jacqui, left, and Kayla, while announcing one of the names for the defensive lineup. -- Kelli Lageson/Albert Lea Tribune

CAMP BUEHRING, Kuwait — Some Minnesota Vikings cheerleaders stopped by Sunday evening to entertain a crowd of soldiers as part of a USO tour. 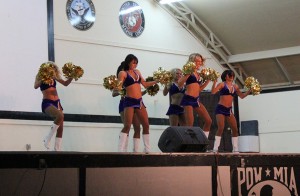 Some Minnesota Vikings cheerleaders dance in front of a large crowd of soldiers Sunday evening at Camp Buehring in Kuwait.

The cheerleaders spoke to the crowd in between dances and also posed with soldiers earlier in the evening who were recording video introductions for the Vikings’ lineup. Only soldiers from Minnesota were asked to record introductions.

Among the soldiers who got to introduce players were Austin’s Spc. Trevor Kolb, of the 1135th Combat Support Company and Spc. Douglas Anderson, of Rochester’s Bravo Company. Sgt. Ken Laite, of Albert Lea’s Delta Company also got to record an introduction.

The soldiers were asked to say the player’s position, number and name into a camera while cheerleaders stood by. The introductions are expected to be shown at the Nov. 20 home game against the Oakland Raiders. 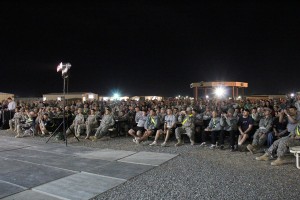 The crowd waits for the Minnesota Vikings cheerleaders to take the stage at 7 p.m. Sunday at Camp Buehring in Kuwait. The cheerleaders danced to various songs and spoke to the crowd. -- Kelli Lageson/Albert Lea Tribune 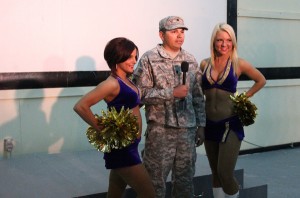 Spc. Douglas Anderson, of Austin and part of Rochester's Bravo Company, stands with Rhea, left, and Demi, while announcing one of the names for the Minnesota Vikings lineup. The taped announcements will be played at the Nov. 20 home game against the Oakland Raiders. -- Kelli Lageson/Albert Lea Tribune