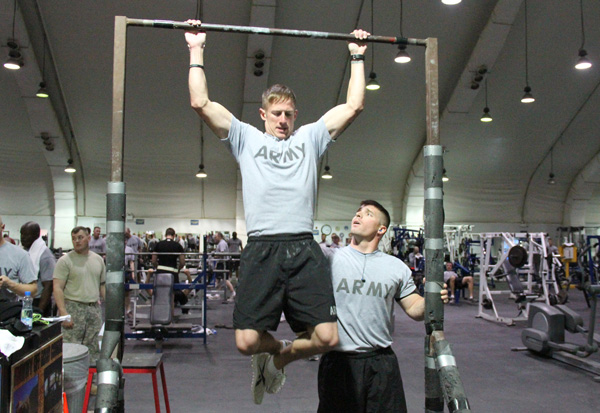 Sgt. Trevor Nelson, of Alden, does a set of pull ups while Staff Sgt. Dustin Eggum, of Hayward, spots. The two are snipers with Albert Lea’s Delta Company and usually work out together. -- Kelli Lageson/Albert Lea Tribune

Editor’s note: This is the sixth in a nine-part series on Minnesota National Guard soldiers deployed to Kuwait.

Many soldiers use the time they’re deployed to work on personal goals like getting into shape. There’s ample ways they can do that at Camp Buehring, with a large gym, aerobic tent and many other fitness-oriented activities.

Hitting the gym is one of the most common ways sodliers work out, though there are other options. It’s the biggest tent on base and houses cardio equipment like treadmills, stairsteppers and ellipticals, and it also has free weights and many weight-lifting machines.

“We have a pretty good rotation,” Eggum said. “We usually work out together.”

He said they have schedules where sometimes they try to lift weights and bulk up as much as possible and other times they work on cardio and heart rates. It’s hard for them to take time off from working out.

“We force ourselves to take days off,” Eggum said. “It’s the only thing that keeps us sane around here.”

Spc. Kolt Krumpos, of Austin, agreed that working out helps their mental health as well as their physical health.

He’s in Eggum’s unit and a sniper, and said they have adequate time to work out at the gym. He considers working out good for himself as well as something the unit does to prepare for missions.

“You don’t want to be the weakest link,” Krumpos said.

Another option for soldiers are the weekly 5k runs on Wednesdays, which are organized by MWR, or Morale, Welfare and Recreation. This week there happened to be extra organized runs, which happens with holidays. On Tuesday, there was a 5k celebrating the Third Army’s birthday, Wednesday had the regular weekly 5k, Thursday had a 5k for the Marine Corp’s birthday and today there was an 11k run to celebrate Veterans Day.

Other than organized runs and the main gym, there’s an aerobic tent on base that holds classes certain days of the week including yoga, spinning, power abs, P90X, and muay thai, a fighting style from Thailand.

Spc. Ronnie Aldrich, of Austin, is in the Headquarters Company, 2nd Battalion, 135th Infantry Division, and said he has personal goals he wants to achieve during the deployment. He hopes to be under 10 percent body fat as well as complete 20 or more pull ups.

He said he knows a few soldiers who are also personal trainers, who have given him some tips for his workout plan. He said the gym on the base is fully stocked with any kind of machine needed to work out.

“It’s a lot better than the Y back in Austin,” Aldrich said. “Everything you need is here.”

See a gallery of the gym.