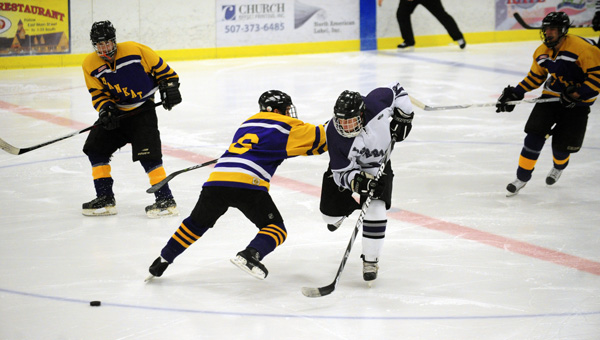 Brent Putney skates past a Maverick defender on Friday night. The Warriors had their hands full as they were blanked 5-0 by their opponent. -- Garrett Wampler/Albert Lea Tribune

After outscoring their opponents by a combined total of 34-10 through the first four games of their inaugural campaign, the Waldorf College Warriors were put on ice in a 5-0 shutout loss to Minnesota State University-Mankato.

Waldorf was able to hold the game to a close 2-0 game through the first two periods before allowing the Mavericks to jump all over the net in the final stanza on Friday night at City Arena.

The loss hasn’t put a damper on the Warrior’s locker room, but instead it has ignited the team’s desire to get back out onto the ice against the Mavericks for Saturday night’s contest.

“The guys are eager for tomorrow,” said Brett Shelanski, the Warriors first year head coach. “Obviously losing is disappointing. It is the first time we felt it this year.”

Minnesota State-Mankato opened the game with a fury of fast and physical play that allowed for multiple breakaways in the opening period.

Warrior’s goal tender Michael Nelson did all that he could to stop the advances, throwing out a beautiful glove save and another stick save. Even with his efforts the Mavericks jumped on the scoreboard in the 12th minute after Anthony Pittman took advantage of a breakaway and buried the puck into the net.

“Michael played very well,” Shelanski said. “He kept us in the hockey game. He made some big saves for us and he added to the function of the entire team, not just one guy.”

Dylan Glaus tacked on another goal in the second period. This time the Mavericks worked through the tough Warrior defense and beat Nelson glove side for the score.

The score would get out of Waldorf’s grasp late in the final period. William Bruggeman, Pittman and Andrew Hirsch all added goals. Pittman’s second goal of the game came shorthanded during one of the Warrior’s nine empty power play attempts.

Power play effectiveness has plagued Waldorf early this season, but Shelanski did see some bright spots to take away from the Warriors nine attempts against the Mavericks. 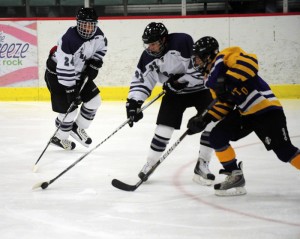 Jordon Van Son tries to work the puck in front of the net. The Warriors were shut out for the first time in school history at City Arena on Friday night.

“It is definitely something we work on everyday in practice,” he said. “It is a function of hitting the net and urgency of the pucks that costs us on the power play tonight.

“I thought we had some good looks and good puck movement.”

At one point towards the end of the third period the power play even gave the Warriors a five on three advantage and they still couldn’t find the net.

Emotions ran high towards the end of the game resulting in a few tussles in front of the goals, one Warrior and three Mavericks ended up in the penalty box at the same time.

Shelanski said he was pleased with his teams’ discipline and their ability to walk away from those skirmishes. 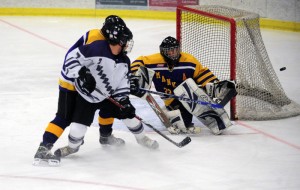 Joshua Bevers looks as his attempt to score slides away form the goal.

“I didn’t have a problem with the effort level or the competition level,” Shelanski said. “But like I said, we’re eager to get back out there.”

The Warriors play the Mavericks again on Saturday night in their last home game until Feb. 11. Next on the schedule is a game against Iowa State University “B” on Nov. 11 and 12 in Ames, Iowa.