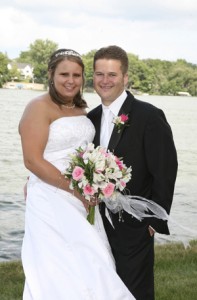 Parents of the bride are Aaron and Connie Bergerson, of Albert Lea.

Grandparents of the bride are Roger and Delores (late) Schultz, of Albert Lea, and LaVerne and Opal (late) Bergerson, of Clarks Grove.

Parents of the groom are Danny and Tammy David, of Albert Lea.

Grandparents of the groom are Hubert (late) and Donna Mae (late) Thumes, of Stillwater, and Ernie (late) and Deanna David, of Warsaw.

Maid of honor was Tracy Bergerson, sister of the bride, of Rochester. Bridesmaid was Kourtney Tlustos, friend of the couple, of Sioux Falls, S.D.

Flower girls were Faith, Olivia and Madelyn Graceffa, cousins of the bride, daughters of Dave and Amy Graceffa, of Racine, Wis.

Best man was Bo David, brother of the groom, of Albert Lea. Groomsman was Travis Herrlich, friend of couple, of Kenyon.

Ushers were Michael Morkrid, of Albert Lea, and Paul Kelly, of Clarks Grove, both friends of couple.

A reception was held at Wedgewood Cove Golf Club.

The bride is a 2004 graduate of Albert Lea High School and a 2009 graduate of Minnesota State University, Mankato, with a degree in elementary education. She is employed at Humboldt High School in Humboldt, Iowa.

The groom is a 2002 graduate of Albert Lea High School. He is employed at Suzlon Wind Energy in Humboldt, Iowa.