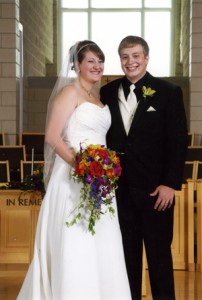 Parents of the bride are Homer and Soozi Ford, of Indianola, Iowa.

Parents of the groom are Dale and Nancy Kelly, of Clarks Grove.

Best man was Chris Hull, friend of the groom, of Guernsey, Wyo. Groomsmen were David Kelly, brother of the groom, of Rochester, Matt Ulmer, of Hartford, S.D., Korey Peterson, of Clarks Grove, Tyler Gustafson, of Brandon, S.D., and Thomas Wagar, of Valley City, N.D., all friends of the groom.

Holly is a 2008 graduate of Indianola High School. She is currently a student at University of Sioux Falls studying marine biology.

After a wedding trip to the Bahamas, the couple resides in Sioux Falls, S.D.