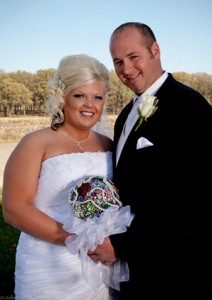 Parents of the bride are Clark and Lori Ericksen, of Glenville, and Richard and Bobbie Honsey, of Forest City, Iowa.

Grandparents of the bride are David and Ruth Christenson and Berdine Honsey, both of Emmons, and Ramona Ericksen, of Glenville.

Personal attendants were Anna Mattson, of Emmons, friend of the bride, and Katie Honsey, of Forest City, Iowa, sister of the bride.

Flower girl was Taylor Vanek, cousin of the bride, daughter of Lane and Sandy Vanek of Twin Lakes.

Kara is a 2006 graduate of Glenville-Emmons High school and a 2010 graduate of Minnesota School of Business in Rochester with a bachelor’s degree in business management with a emphasis in human resources. She is currently employed at Taylor Corporation in Mankato.

Paul is a 2002 graduate of Minnesota Valley Lutheran High school in New Ulm and a 2004 graduate of South Central College in Mankato with an associate’s degree in carpentry. He is the owner of Dream Craft Homes in Mankato.

A reception was held at Wedgewood Cove Golf Club following the ceremony.

A honeymoon is planned to Playa Del Carmen, Mexico, in January. The couple resides in Lake Crystal.