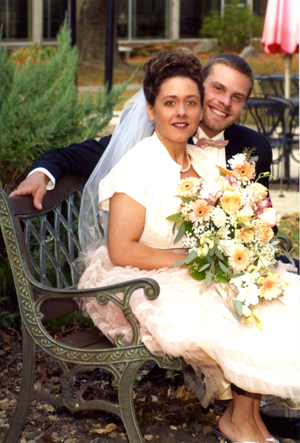 Parents of the bride are Rod and Linda Tovar, of Albert Lea.

Parents of the groom are John and Trudy Madoll, of Grand Rapids.

Flower girl was Abigail Dolph, cousin of the bride, daughter of Danielle Peterson, of Albert Lea.

Ring bearers were Carter Benson, nephew of the bride, of Shakopee, and “DJ” Madoll, brother of the groom, of Grand Rapids.

Greeters were Seth Tovar and Hailey Christenson, both cousins of the bride, both of Albert Lea.

The bride’s son performed a rap song to his mother. Her favorite of his raps, “The Meaning of Life.”

Photographer was Steven Tovar of Creative Touch Photography and uncle of the bride.

A reception was held at Americas Best Value Inn at 7 p.m.

The DJ was Jacob Abrego of Uptown Sound.

A wedding trip will be taken at a later date. The couple resides in Albert Lea.