A celebration of life service for Bill will be held at 2 p.m. Friday, Nov. 25, at the United Methodist Church. The Rev. Tom Biatek will officiate. Visitation with the family will be one hour prior to the service. 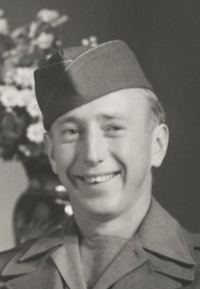 William Thompson was born May 3, 1923, to Roy and Ida Thompson. He attended rural grade school and graduated from Albert Lea High School in 1941 and then worked in a variety of jobs as well as on the family farm.

He married Doryce Kabrud on Dec. 31, 1942, and worked on the farm until he entered military service. The family were life members of the United Methodist Church, where Bill had served on the Stewardship Committee, on the finance committee and also volunteered as a greeter, usher and kitchen helper.

He was a member of the Elks and Eagles and a former member of the Chamber of Commerce. He was a life member of the VFW Post 447 and American Legion Post 56 where he served in numerous chairs, and as Post Commander was responsible for the formation of the “Careyaires” men’s chorus.

He also served a number of years with the Honor Guard and as co-chair of a number of parades.

A major part of his career was spent in the retail furniture and carpet trades, and some years with the Albert Lea Tribune advertising department, where he retired in 1985.

Following retirement, he and Doryce spent over 20 winter seasons in Lake Havasu City, Ariz., which they truly enjoyed. It was also a time to have their daughter, son-in-law and the grandkids from Alaska as well as their son and daughter-in-law and family from Minnetonka, spend some time in the sun.

Bill is survived by his wife of 68 years, Doryce; son, Bill Jr, and wife, Kay, of Minnetonka, and daughter, Carola Thompson, and husband, Larry Spencer, of Juneau, Alaska; and grandchildren: Dr. E. Sophie Spencer and partner, Mo Ashraf, of Seattle, and Logan Spencer of Charlottesville, Vir., and step-grandson, Erik Zeleznikar, and wife, Kara, of Minneapolis.

He was preceded in death by his parents; brother, Robert, of Clarks Grove; sister, Dorothy Reed; and brother-in-law, Glen Reed, of Lake Havasu City. He is survived by his sister-in-law, Marion Thompson, of Clarks Grove, as well as a host of cousins, nieces and nephews.