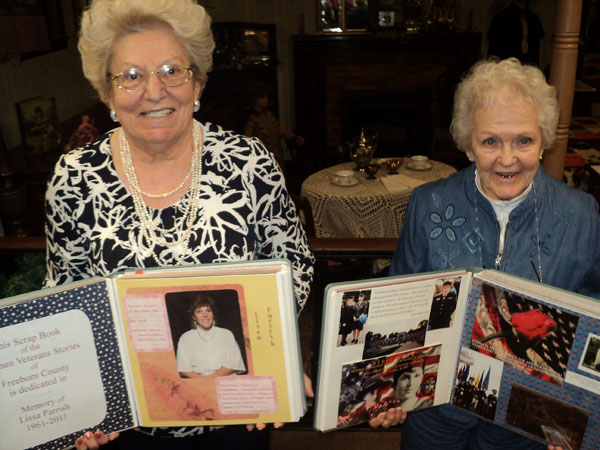 The Women Veterans of Freeborn County added two more stories to the existing Collection of Stories of Women in Military Service being maintained by the Freeborn County Historical Museum.

Delight lees tells the story of enlisting in the Women’s Army Auxiliary Corp then of being reassigned to the Women’s Army Corp a few months later. She tells about her time in service during World War II and some of the obstacles she had to overcome. Delight tells of her service in country and white stationed in England during a time of frequent bombing and France just after it was liberated.

Lissa Parrish a regular army enlistee from 1981 (now deceased) is able to have her story told thanks to her parents, James and Kathe Grodhaus, and sister, Beverly Jackson, past curator of the Freeborn County Historical Society and Museum. Parrish’s story shows how far women have come in the service, being a part of the service and not assigned to the service.

The on going collection of stories at the museum was first collected by audio interviews done by the Minnesota State University, Mankato for the Veterans History project. A copy of the audio version has been placed in the MSU library there to preserve the history of Women Veterans.

Parrish was very interested in keeping the stories alive locally. Parrish purchased and prepared the scrapbooks for the Women’s Veterans stories but was unable to finish them due to a medical condition that took Parrish’s life. In memory and in honor of the service Parrish performed both for her country and locally for the Women Veterans the scrapbook of stories is dedicated to her.

The Freeborn County Women Veterans are women from all five services and from any given period of time. The Women Veterans meet monthly on the first Wednesday of the month presently at the American Legion, North Broadway. There are no dues or time requirements to belong, the women meet in fellowship of a common shared history. The Women Veterans when requested also have a flag program on the history of the American flag that tells how the flag and the country grew.