‘Are there no poor laws?’ 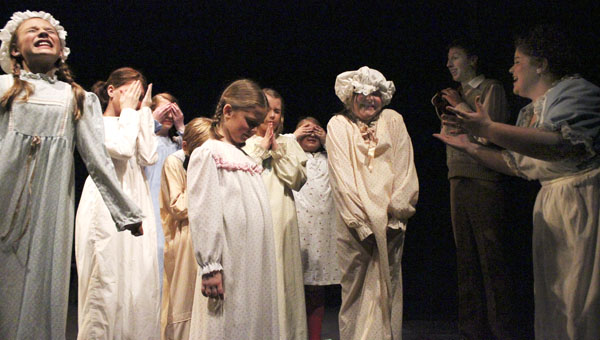 A show that opens tonight, full of traditional carols and actors of all ages, has all the right stuff to get people into the Christmas spirit.

Albert Lea Community Theatre presents “The Dickens Christmas Carol Show” starting at 7 p.m. tonight at the Marion Ross Performing Arts Center. The show is an adaptation of the Charles Dickens Christmas classic and is co-directed by Glen Parsons and Gordy Handeland. Parsons plays Ebenezer Scrooge, who’s on stage in most scenes, so it helped to have another director.

“It’s really a family show,” Parsons said. “We’re just really proud of the whole cast — we have a fun time together.”

Not only is the show appropriate for all ages, there are actors ranging from young to old in the show. Also, a few of the actors are related to others, which can be interesting.

One example is Ann Van Brocklin, who plays the second charitable woman, a caroler and a party guest. Her daughter, Grace, who plays Ignorance and an orphan, originally tried out for the play back in October. Ann came along, and decided to try out on a whim with friend, Jill Nelson. Both were cast in the play.

“I feel ready, but it’s live so you never know,” Ann said. “The directors are great — for not being a seasoned actress they make you feel like you do have something to offer.”

The directors both said they enjoyed having all ages cast in the show. They do have to teach some of the simpler things about theater to newcomers, but it’s all part of the fun.

“They learn from the people around them, too,” Handeland said.

Ann said her favorite part of the show is the party at the home of the Fezziwigs, where all the characters are singing and dancing. The directors agreed that the scene is a lively one the crowd will enjoy.

The show follows Ebenezer Scrooge on his journey with three Christmas spirits as he transforms from a cold, mean-spirited man to a generous man filled with holiday cheer. Parsons said the emotional journey he goes through is one of his favorite parts of playing Scrooge.

It isn’t a musical, but it is a play filled with music, Parsons said.

In addition to carolers signing between scenes, the children who play the orphans plan to sing in the lobby before each show. The show opens Friday and Saturday with a 2 p.m. matinee showing Sunday. Other showings will be at 7 p.m. Dec. 7-10, all at the Marion Ross Performing Arts Center. “The Dickens Christmas Carol Show” lasts about two hours, with a 15-minute intermission.

Tickets are $15 for adults and $10 for students. They may be purchased by logging on to www.actonbroadway.com or at the box office which opened Monday.