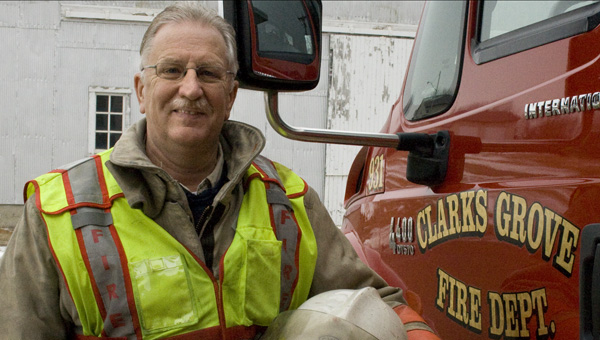 Clarks Grove Fire Chief Carl Anderson stands in his firefighter gear Monday outside the station. Anderson, 59, will retire as chief in January after 39 years with the department. -- Sarah Stultz/Albert Lea Tribune

Starting as a firefighter for the department in 1973, Anderson became assistant fire chief in 1975 and then chief in 1982.

When his pager went off, he responded, calling it his opportunity to serve and protect the community.

In January, however, after 39 years with the department — 29 as fire chief alone — Anderson, 59, will retire from his position.

Whether it was responding to a house or shed fire, tornado, snow storm or car wreck, Anderson said his experiences have strengthened him as a person.

Firefighter Dan Smith, who has been with the department for about two years, will take over as chief.

Changes over the years

Anderson said when he first started with the Clarks Grove Fire Department, the firefighters had rubber coats and rubber boots, and the trucks were old.

Now, they are equipped with modern trucks and gear.

While they used to have what he called fire phones — where they’d notify each other via a phone tree about a fire — now, everyone on the 25-member team carries a pager through Freeborn County’s new Allied Radio Matrix for Emergency Response system. This has improved response times and communication abilities.

After more than 30 years on the department, Anderson said he has many memories of his time as a volunteer.

He said he remembers the ice storm of 1991, when the firefighters slept at the station for five days straight.

He remembers when the Watonwan Farm Service elevator exploded from a lightning strike in July 2007 and responding to the June 17, 2010, tornadoes.

The last big fire he responded to was at Peterson Excavating/I-90 Recycling on July 10, 2011. Eleven fire departments came to douse pallets. This was after a fire burned a building at the business on May 1, 2010, where nine fire departments were needed.

Then, of course, he recalled many of the house fires and shed fires.

“With fire losses, you just feel for them,” Anderson said. “You give them hugs with all of your fire gear. They’re crying and actually you’re crying, too. We just get through it. It’s all part of being a volunteer.”

He said he is amazed at his fellow firefighters and their willingness to help. Even if their pagers go off at 2 a.m. in freezing weather, they jump right in to help.

“When the pager goes, everyone becomes one,” Anderson said.

While there have been challenges — keeping everyone trained on the equipment and making sure everyone is safe — he said the department has “excellent” equipment.

He credited the mutual aid agreement with other fire departments across the county and the county’s dispatchers.

He said he’s going to miss the camaraderie he shares with his fellow firefighters.