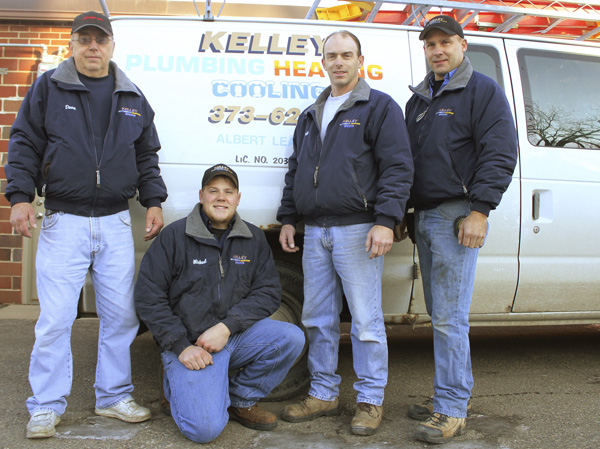 From left are Dave, Michael, Jeff and Jim Kelley, three of the five generations of a family that’s been in the service business in Albert Lea for many years. Michael recently started at Kelley Plumbing, Heating & Cooling. -- Kelli Lageson/Albert Lea Tribune

Few businesses can say they have had five generations of experienced workmen continue the family business.

Kelley Plumbing, Heating & Cooling added its fifth-generation this year when Michael Kelley came to work at the business on South Broadway Avenue in Albert Lea. That location opened in 1969 when Dave, Michael’s grandpa, and Dave’s father, Carl, opened it. Carl and Dave had both been working for some time in the industry, and Carl’s dad J.M. Madson was the first in the family to work in plumbing. Dave’s sons, Jeff and Jim, who is Michael’s dad, now manage the day-to-day of the business.

“They grew up here in this business,” Dave said.

And that business has changed over the years. While the first generations focused mainly on plumbing, the newer generations have begun to diversify to serve more customers in more ways.

Not only do they install and repair plumbing, they work on heating, cooling and ventilation systems. They also sell and repair water softeners, furnaces, air conditioners and repair parts.

“We can be busy all year but construction season is the busier time of year,” Jeff said.

Jeff, Jim and Michael said they were never pressured to join the family business, and Dave said he’s proud of them for continuing on in the tradition. All three worked from a young age at the shop helping to stock shelves and with various easier tasks.

Jeff said while they do sell some parts, they know there are other stores with more inventory. What sets them apart from their competition is being able to answer questions and provide personal service.

“Workmanship and quality of materials is important to us,” Jim said.

Michael recently graduated from North Iowa Area Community College with an associate’s degree after studying heating, ventilation and air conditioning. He said he likes continuing on in the family tradition.

“I like that it’s different every day,” Michael said.

Dave said he likes that his sons and grandson are working in the same business that he worked in his whole career.

“Michael’s on his way to following the same tradition,” Jim said.

The goods
What: Kelley Plumbing, Heating & Cooling
Open: 8 a.m. to 4:30 p.m. Monday through Friday
Located: 923 S. Broadway Ave. in Albert Lea, where they’ve been since 1969
Interesting fact: The Tribune did a feature on the family in 1999 when they had only four generations.