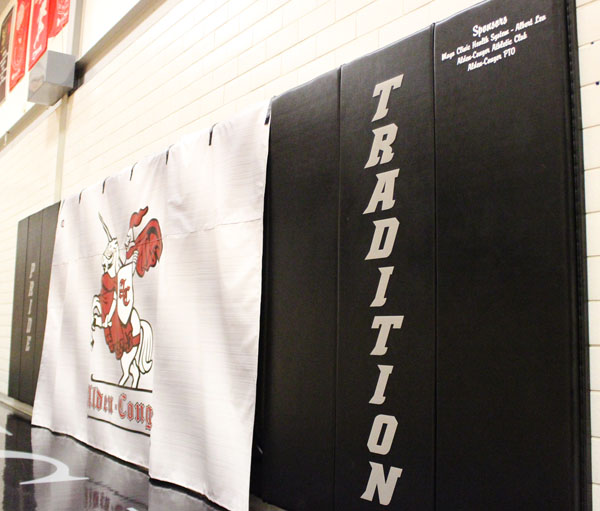 The new padding along the gym walls at Alden-Conger School. The school was able to replace the padding with the help of donations. -- Kelli Lageson/Albert Lea Tribune

ALDEN — The next step in updating the gym at the Alden-Conger School is complete.

On Saturday new padding was put in on both ends of the new gym floor. Ada Theusch, teacher and Athletic Club member, said the upgrade was possible because of donations.

The padding was installed and manufactured by Sports Graphics, of Clarion, Iowa. The same company installed the previous padding, which has lasted since 1993. Theusch said that padding was beginning to deteriorate.

“If they would have continued to deteriorate then it would have been a safety issue,” Theusch said.

The other half of the funding came from the parent-teacher organization, which donated $1,000. The final $2,000 came from the Athletic Club and its various fundraisers like an annual carnival and Papa Murphy’s pizza fundraisers.

“We have the sponsors listed on the side, printed right on the mat,” Theusch said.

The mat also says “Pride and “Tradition” and has the Alden-Conger Knights logo. It also comes with a vinyl curtain that hangs in front of the middle part of the padding to be used during gym class, practices or any other activities that could damage the padding.

The gym and stage flooring was recently repaired last summer. The court’s design features a red and gray Knights logo in the center with thick, black out-of-bounds lines. It also features free throw lanes that fade from red to black paint. The new padding is on each end of the court near the free throw lanes.