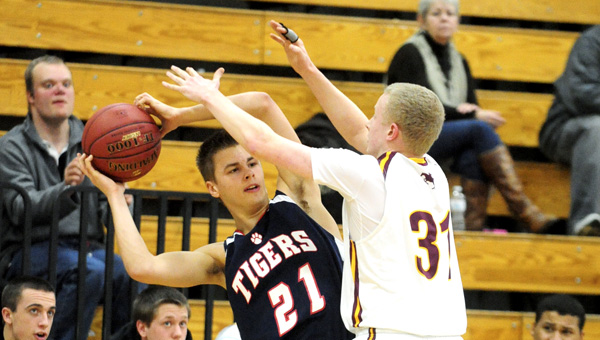 Tyler Wichmann leans over to keep the ball out of reach of Forest Lake defender Dusty Boyer. Wichmann led the Tigers with 18 of their total 54 points. Brandi Hagen/Albert Lea Tribune

Lea boys’ basketball took control of the tip-off at Albert Lea High School on Wednesday. Playing in the final round of the Tiger Classic, Albert Lea faced Forest Lake for their first chance at the title since 2004.

At half, Albert Lea was down by 11 points. Forest Lake finished the second half ahead by 13, for a final score of 67-54.

The first point of the game, a free-throw by Cody Scherff was answered with a 3-pointer by Forest Lake’s Noah Davis.

Four minutes into the game, Tyler Wichmann sunk a 3-pointer bringing the game to a 10-10 tie.

Dylan See-Rockers rebounded his own shot with just over 11 minutes left of the first half and scored the Tigers last two points before Forest Lake went on an eight point run.

During the next seven minutes, Albert Lea scored seven points to Forest Lake’s eight before the clock was stopped for an injury.

According to Afton Wacholz, ALHS athletic trainer, Matt Hultgren, a senior from Forest Lake, was experiencing pain in his knee from being rolled on top of, but nothing very serious.

When play resumed, Albert Lea picked up five points with Kyle Ooms making the last basket of the half with 1:23 remaining.

Forest Lake had the lead going into the second half with a score of 35-24.

According to Tigers coach, Lucas Kruescher, something that could really help his team would be to play more aggressively at the basket.

“We need to attack the rim more, we’re settling for shots,” Kruescher said. “We’re always going to have outside shots against a lot of these teams. It’s what other teams are doing best.”

Ready to play catch up, the Tigers brought their score within eight points of Forest Lake during the first five minutes.

Their gain quickly slipped away as the Rangers made two 3-pointers and six more points for a 16 point lead with 9 1/2 minutes left on the clock.

Due to shots by Evan Templeman and Tyler Wichmann, at 7:01 the Tigers once again were closing in on Forest Lake’s lead 55-47.

In the next three minutes, the crowd, coaches and players started to get really upset with calls made by the referees. The refs put an end to the arguing by saying enough is enough and resuming game play.

The game ended with a Forest Lake basket and four free throws from Albert Lea.

Kreuscher was proud of the effort the Tigers made throughout the entire game. Games like this one, he said, will make them a better basketball team.

“We need to take advantage of playing this tough competition that we have and apply that forward,” said Kreuscher.