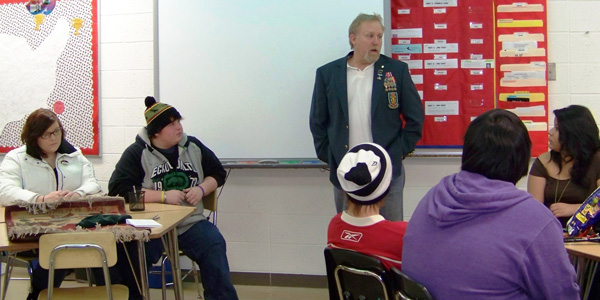 A group of students at the Area Learning Center, along with the school’s success coach and teacher, collected items from staff and students at Brookside Education Center to send to American soldiers who have been deployed overseas. Five boxes were filled with items that the students collected and were sent to Washington D.C. where they will be forwarded to troops in need.

The students were also fortunate to have two servicemen visit their class to share stories of their experience in the military. Lt. Col. Mike Funk spoke with the students about his service in Kosovo, which was a great experience for the class to see another side of their superintendant of Albert Lea Area Schools. Funk was also an active supporter of the students’ project.

The students welcomed a second guest, Ronald Reule, who is retired from Special Forces. Reule, who visited the class on the 70th anniversary of the bombing of Pearl Harbor, shared with the students his experience in his deployments and some of the challenges of being in the Special Forces.