Alzheimer’s affects everyone in the family

I remember watching my family members stress about who was going to take care of my grandpa. Was he going to be safe on his own, when could he not work anymore, how to take away his driving abilities, how would he understand being placed in a nursing home. 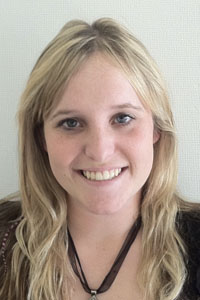 He was always a kind, gentle man before the disease, while with the disease he never seemed like himself. It did, however, amaze me that on his good days he might not have remembered his name, but he would remember a family vacation 10 years ago, or something he did while growing up. He had his good days and bad days — the one thing that I always tried to remember were the good memories I had with him and I still cherish those today. Those memories are what I want to remember of my grandpa — not the disease. I am thankful for the memories and moments I have of him, my favorite treasures are the pictures of us having a good time.

I also remember the last week he was alive; I had not seen a glimpse of my real grandpa in a very long time. However, that day he did hold my hand, and I felt the warmth of my grandpa inside my mind, I felt as though he was telling me he was OK and to not be scared. That is one thing I will never forget. It was very difficult for me to be in the nursing home because I had been so close to my grandpa growing up. I was grandpa’s girl. I wanted to be there for him but it made me so sad. I’m very glad that I was by his side in the end because I always knew he was on my side.

I lost my best friend when my grandpa got Alzheimer’s. He was in his early 60s when his disease progressed, and the last five years he was in a nursing home. Those five years he was not the man I remembered, and it was very difficult watching my grandpa go through the changes and losing him. The final stages of the disease, he was blind, unable to eat regular food because he couldn’t remember to swallow, unable to walk to the rest room because he was crippled and bed ridden. The kind, active grandpa he once was was unable to shine through. He, however, always seemed calmer when my grandma was with him or a family member. The nurses he had were very kind, but the nursing home seemed so crowded and these people didn’t know my grandpa the way us family members did.

I really hope a cure can be found for this disease so that others do not lose their grandpas, too. This disease not only affects the person who has the disease but it also affects the patient’s family members and friends. My grandma tried to take care of my grandpa for as long as she could, it was hard for her, hard on her body and hard on her emotions, mostly because her best friend and the man she loved was being taken away a lot sooner than I’m sure she ever imagined. When my grandpa was placed in a nursing home, my grandma tried to spend every day visiting him — she fed him supper most nights because if she fed him he ate more than if the nurses fed him. 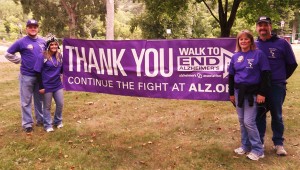 Amanda Weiss and family members pose for a photo at a recent walk to end Alzheimer’s. -- Submitted

Family get-togethers were not the same because there came a point where my grandpa wasn’t able to leave the nursing home, and it was hard for his family to see him not knowing who he was. I also think it was also hard on him, being in a place that he should know, but because of the disease, he often had no idea where he was or what was right. Routine became very important for him. I, however, always felt my grandpa deserved so much more. I wanted him to be around to see so many things in my life but because of Alzheimer’s he never got to see me grow up.

My grandpa’s prized possession throughout his disease was a poodle named Minnie. Eventually the dog couldn’t be around him because he couldn’t handle the dog right, so a stuffed animal replaced the dog to comfort my grandpa.

I have so many thoughts about this disease, and I really hope one day a cure will be found. This will be my second year where I will walk in the Alzheimer’s Memory Walk in memory of my Grandpa Wayne. I volunteer because I can and I want to make a difference. I want to find a cure!

Amanda Weiss works at the United Way of Freeborn County.