Audrey Gail (Cox) Wipplinger, 81, of Austin, formerly of Kiester, died Monday, Dec. 5, 2011, at Sacred Heart Care Center in Austin. Funeral services will be at 3 p.m. Friday at Our Savior’s Lutheran Church in Kiester with the Rev. Bonnie Roys officiating. Visitation will be from 4 to 7 p.m. Thursday at Bruss-Heitner Funeral Home in Wells and will continue one hour prior to services at the church on Friday. Burial will be at Our Savior’s Lutheran Cemetery in Kiester. Bruss-Heitner Funeral Home in Wells is in charge of arrangements. 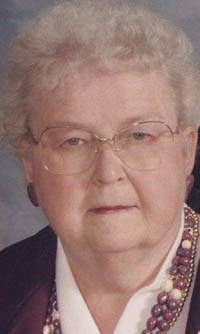 Audrey was born March 17, 1930, in Eden Township, Winnebago County, Iowa, the daughter of George Albert Cox and Aurora (Hauge). She was baptized on April 20, 1930, and confirmed on June 11, 1944, at Trinity Lutheran Church near Kiester. She graduated from Kiester High School in 1948 and furthered her education at Waldorf College receiving an associate in education degree in 1950. She taught kindergarten in Cylinder, Iowa, and on June 28, 1951, she married Leo George Wipplinger at Trinity. They made their home north of Kiester raising a family, and she helped Leo with the farming, dairy and hog operations. Audrey returned to school from 1968-1970 earning her Bachelor of Science degree from Mankato State College. She taught third and fourth grade at Conger Elementary School and later at Alden from 1971 until 1980. Upon the death of her husband in 2003 she moved to Albert Lea for four years and then to Sacred Heart Care Center in Austin.

As a child Audrey learned how to carve from her uncle – a hobby that continued until she was no longer able. She designed the farm scene on the Farming of Yesteryear mug, always being generous with her talents and caring for others. In later life she developed the disease Super Nuclear Palsy, which limited the activities she so loved, though even through these hardships she kept a positive outlook on life and made the best of each day. She was an active member of St. Paul’s Lutheran Church and later Our Savior’s, participating in circle and WELCA, always trusting in the Lord.

She was preceded in death by her parents; husband, Leo, in 2003; sister and husband, Gwen and Keith Rowley; and sister-in-law, Sharon Wipplinger.