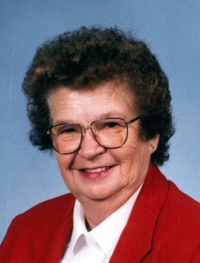 A memorial service for Betty Schmidthuber will be held at a later date at Salem Lutheran Church in Lake Mills. Betty wished to be cremated, and her ashes will be placed to rest at Salem Memorial Cemetery, rural Lake Mills.

Betty Yvonne (Lukecart) Schmidthuber was born on Jan. 19, 1928, in Hutchinson, to Cecil and Leone (Fisher) Lukecart. She grew up and attended schools in Albert Lea.

Betty worked at Deluxe Manufacturing in Lake Mills for many years before she fulfilled a dream to become a hairstylist. On March 11, 1976, she graduated from Capri Cosmetology College in Mason City. Upon graduation and receiving her license from the State of Iowa she opened Betty’s Hair Styling on Main Street in Lake Mills. Betty had her salon until she retired and then she was able to enjoy her passion of golf with Dale and their many friends.

Betty’s family would like to thank and pay a special tribute to Nancy and Rick Oltman. Betty always referred to Nancy as her guardian angel.