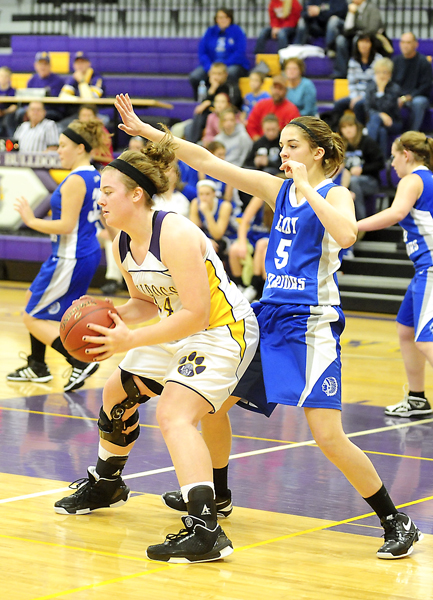 Lake Mills forward Megan Johnson backs down an opponent on Saturday afternoon in Lake Mills. Johnson had a team-high 16 points as the Bulldogs lost 50-48 on a buzzer-beater from Rockford.-- Brandi Hagen/Albert Lea Tribune

LAKE MILLS, Iowa — It turned out to be a close game and a tough loss for the Lake Mills girls’ basketball team on Saturday afternoon against Rockford in Lake Mills.

The girls started the first quarter off with back and forth field goals, and Lake Mills took the lead 12-8 but fell quickly, letting Rockford advance 17-12. 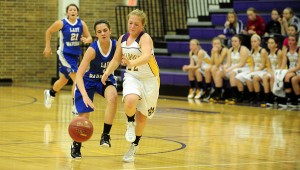 Lake Mills guard Sarah Orban, right, chases down a loose ball on Saturday in a 50-48 loss to Rockford.

Rockford kept the pressure on Lake Mills in the second quarter shooting four more field goals. Lake Mills fought back and returned the shots. Carlie Christianson and Megan Johnson each scored two field goals and Brook Groe, one, keeping the score close. At halftime, Rockford had a slight lead at 24-22.

The Bulldogs were only able to pick up seven points in the third quarter to Rockford’s 15. They were losing their fight and enthusiasm for the game. The crowd became hushed as the score widened, 39-29.

The fourth quarter was a complete turn around when Catherine Adams sunk a 3-pointer and the crowd exploded into cheers. The fight was back in the lady Bulldogs as they realized they still had a chance.

“I was very excited they finally were playing the ball I know they can,” said Bulldogs coach Beth VanRoekel. “They were flat the first three quarters. They just weren’t into the game and finally Catherine hit that 3-pointer and all of a sudden it sparked something. I was very excited to see them get excited for each other and start playing some good ball.”

Adams was on a roll, scoring three 3-pointers in a row.

“We just had to get some points on the board,” Adams said. “Once I got a rhythm on the first shot, I just wanted to keep shooting. ”

Both teams pushed on, the crowd on their feet, hoping for the basket that would take the game. As the buzzer sounded, Rockford took one last shot and made it in for a 50-48 win.

It was a huge disappointment for Lake Mills knowing they had come up from so far behind.

After the game, VanRoekel tried to keep a positive note with her team and told them if they had to have an outcome like that, she was glad it was during a non-conference game.

“I try to not get down on them too much, they’re already down on themselves, but they have to know that they might get hurt,” VanRoekel said. “This is how it feels, so we don’t want to do it again and we’ll come back and start fresh on Tuesday.”