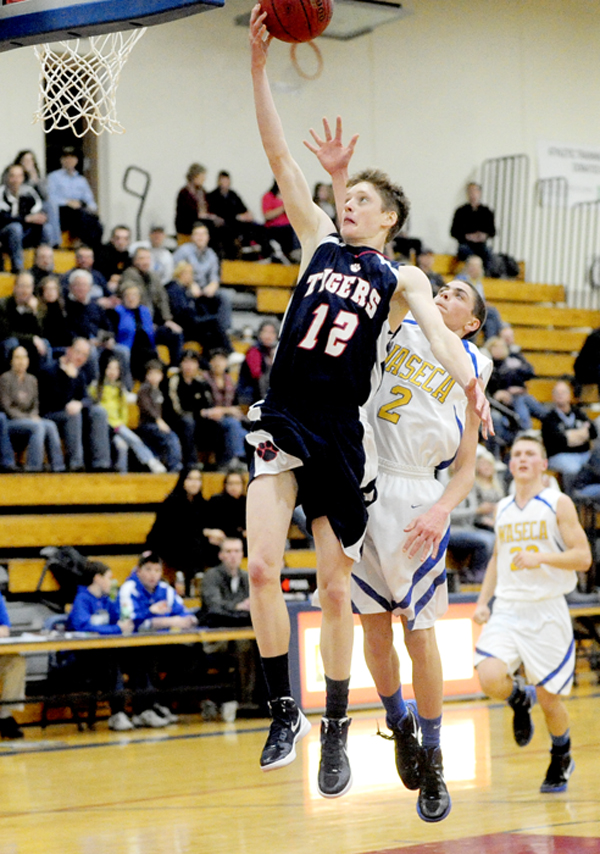 The Albert Lea boys’ basketball team faced a familiar situation on Tuesday during the opening round of the Tiger Classic.

For once, they got an unfamiliar result.

The Tigers hung on to a late lead and made 14 of 19 second-half free throws en route to its first win of the season, 64-60 over Waseca.

It was the third time this season Albert Lea held a late lead at home — the other two resulted in overtime losses. 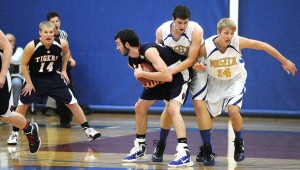 Albert Lea’s Kyle Ooms hangs onto the ball on Tuesday while being swarmed by two Waseca defenders. -- Brandi Hagen

“We’re just sick of being in that situation and losing,” said Albert Lea senior Tyler Wichmann, who made 5 of 6 free throws over the game’s final minute. “We’ve gone through those clutch situations in practice and now we’re ready.”

While Wichmann was the hero on Tuesday after sealing the win on a steal with eight seconds left, he was held scoreless in the first half and was visibly frustrated throughout the game. He admitted he’s struggled this season after scoring 31 points on seven 3-pointers in the team’s first game.

“My shot hasn’t been falling this year,” Wichmann said. “But the team played well.”

Waseca opened the game on a 9-6 run and led 19-18 after a layup by Mitch DeKruif. Ooms backed down his defender on the next play and scored on a hook shot that gave Albert Lea a 20-19 lead.

The Tigers trailed only once again, for 66 seconds midway through the second half.

“It was a tough win and they really had to earn it,” Tigers coach Lucas Kruescher said. “That was big because they learned how to closeout a team.”

Ooms made a layup, was fouled and hit the free throw, and Wichmann and Tyler Vandenheuvel made back-to-back 3-pointers to give the Tigers its largest lead of the game, 47-39, with 8:30 left.

The Bluejays pulled back within one after a five-point swing with 1:38 remaining but the Tigers were too good from the free throw line. Albert Lea scored eight points in the final minute all on free throws to preserve the four-point win.

“It feels so good,” Ooms said. “We’ve been working our butts off and we’ve wanted to get that first win out of the way.”

The senior forward said there was a major difference between the final minutes against Waseca and its overtime losses to Red Wing and Rochester Mayo.

“This time we had the confidence,” he said. “We knew we were going to win. We knew what we had to do in this situation and we just went out and executed it.”

Albert Lea plays for its first Tiger Classic title since 2004 against Forest Lake at 7:30 p.m. tonight. Kruescher said the Tigers match up well against the Rangers (3-2), who play in the Suburban East Conference.

“We have similar styles,” Kruescher said. “To an extent they’re kind of like us, offensively. They like to set a lot of screens, they’re not a team that’s going to live off the dribble much, they’re patient and like to shoot 3’s when they’re available.”