Funeral services for Dorothy J. Emery of Albert Lea, will be held at 1 p.m. Wednesday at St John’s Lutheran Home Chapel. The Rev. Jeff Laeger-Hagemeister will officiate. Visitation will be held at Bonnerup Funeral Service, Albert Lea, today from 4 to 7 p.m. and one hour prior to the service on Wednesday at  St. John’s Lutheran Home. Interment will be in Graceland Cemetery. 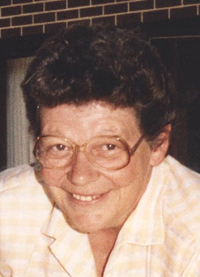 Dorothy was born June 25, 1935, in Albert Lea, the daughter of Cornelius and Jacoba Reynen. She was a graduate of Albert Lea High School. In 1953 she was united in marriage to Clement Emery Jr. in Mason City, Iowa.

Dorothy lived in the Hollandale area for many years but spent most of her life in Albert Lea. She had been employed as a housekeeper for Dr. Ted Myers and worked for Morris Furniture in Albert Lea. In her free time she enjoyed her White Ware Shop she ran from her basement but most of all the time spent will family and grandchildren was most important.

Dorothy was preceded in death by her parents; husband, Clement; and daughter, Penny Spilde.