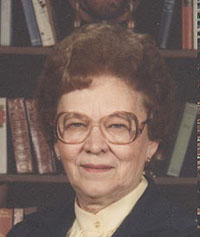 The funeral service for Dorothy J. Miller, of Albert Lea, will be held at 6 p.m. on Friday, Dec. 23, 2011, at Bonnerup Funeral Service, Albert Lea. The Rev. John Holt will officiate. Interment will be in Greenwood Cemetery. Friends may visit from 4 to 6 p.m Friday at the funeral home.

Dorothy graduated from Albert Lea High School in 1936, and then went on to business school in Mankato. She worked for a few years at Wilson & Co. in Albert Lea.

Dorothy married B.A. Miller in 1937, who was president and cashier at the Citizens State Bank of Glenville. They made their home in Glenville, where they were members of First Lutheran Church in Glenville. For the past 40 years Dorothy lived in Albert Lea, where she joined First Lutheran Church. She had been a resident of Thorne Crest Retirement Community for the last four years.

She was a life member of the Albert Lea Hospital Auxiliary, and loved having coffee and playing bridge with her many friends.

Dorothy was preceded in death by her parents and her husband B.A. Miller in 1971.