Dorothy Leona Nelson, of Ellendale, died Tuesday, Dec. 27, 2011, at the Homestead Hospice in Owatonna. Memorial services will be held at a later date. 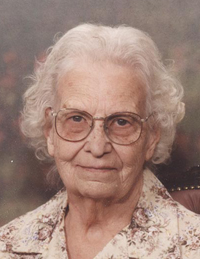 Dorothy was born July 1, 1913, in Linn County Iowa, the daughter of Lafayette and Irene (Madison) Cress. The family moved to Minnesota to a farm northeast of Albert Lea in 1914. In 1918 they moved to a farm west of Geneva. She attended country school in rural Ellendale. Dorothy was united in marriage to Iver Larson on Dec. 28, 1934, by the Justice of the Peace in Albert Lea. Three children were born: Warren, Mary and Roger. Iver died in 1952. Dorothy was then married to Henry Nelson at the Lutheran Church in Geneva. Henry died in 1988.

Dorothy was a member of the First Lutheran Church in Ellendale. She was a homemaker all of her life taking care of her parents and family. She loved gardening and her many fruit trees or could always been found reading her favorite books. She had a very fine memory for family and events throughout her life.

Dorothy is survived by her children: Roger and his wife Joyce of Ellendale and Mary Sullivan of Emmons; daughter-in-law, Thelma Shearer, of St. Augustine, Fla. There are 11 grandchildren and 25 great-grandchildren. One sister survives, Delores Pickens of Ponca City, Okla., brother-in-law, Donald Wilker, of Owatonna; sister-in-law, Arlene Larson, of Camus, Wash., and many nieces and nephews.

She is preceded in death by her parents; husbands: Iver and Henry; son, Warren; son-in-law, Robert Sullivan; nephew, Dennis Wilker; four brothers and one sister.