Duane Eugene Wacholz, 78, of Albert Lea, died Monday, Dec. 19, 2011, surrounded by his family in Albert Lea. Funeral services will be held at 10:30 a.m. Thursday at Redeemer Lutheran Church in Alden. Visitation will be from 4 to 7 p.m. Wednesday at Bruss-Heitner Funeral Home in Wells, and will continue one hour prior to the service at the church on Thursday. The Rev. Greg Ofsdahl will officiate and burial will take place in Mansfield Lutheran Cemetery, Mansfield Township, Freeborn County. Bruss-Heitner Funeral Home in Wells is assisting the family with arrangements. 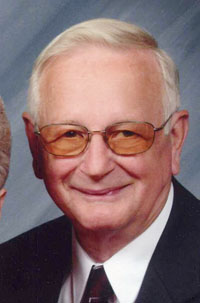 Duane was born April 15, 1933, to Henry and Margaret (Meyer) Wacholz in Mansfield Township. He was baptized and confirmed at Mansfield Lutheran Church, graduated as salutatorian from Alden High School in 1950. After graduation Duane proudly served in the United States Army during the Korean War. On Oct. 11, 1953, he married the love of his life, Loretta Larson. Through their love they raised six children in Alden.

Throughout his life Duane was active in his community in a variety of ways. He served as commander of the American Legion Post 404 and was a member of the Alden-Conger school board where he served as chairman. In later years, Duane was an active member of the Alden Lions Club. He remained committed to his spiritual life through his work on the Redeemer Lutheran church council and his role as the Sunday School superintendent.

Duane was proud to serve the people of Alden as the mail carrier for Rural Route 2 for 40 years. He is a lifetime member of the Minnesota Rural Letter Carriers Association. He served on the state board for seven years, two years as president, as well as a national delegate. During his career with the United States Postal Service, Duane was awarded the special designation of Carrier of the Year in 1989 and was a member of the Million Mile Club.

Many will remember Duane’s love of gardening and his beautiful lawn. Duane valued the time he spent with his family, whether it was camping trips across the United States or a weekend visit. He took great pride in his grandchildren and enthusiastically attended their sporting events. Duane was their No. 1 fan whether it was football, baseball, soccer, basketball, wrestling, hockey or track. He was there, cheering for his team.

He is preceded in death by his parents; one brother, Curtis Wacholz; and a son-in-law, Neil Shellen.

Duane was blessed with many friends and a loving family.