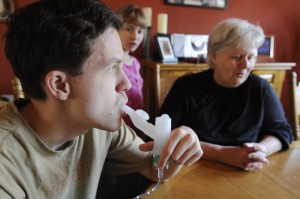 Jared Gast, 28, of Bull Shoals, Ark., uses a nebulizer to get magnesium into his bloodstream while niece Mikella Gast and mother Patty watch. Gast has a rare form of diabetes. -- Kevin Pieper/Baxter Bulletin

Editor’s note: The Albert Lea Tribune would like to thank the Baxter Bulletin for granting permission to reprint this story.

BULL SHOALS, Ark. — Mysterious ailments with symptoms of chronic pain and extreme fatigue kept Jared Gast, 28, of Bull Shoals, from attending high school at Flippin as a teen and from remaining employed later. But, thanks to the ceaseless efforts of his family, he now has hope for improvement.

Gast’s health problems appeared gradually from early childhood until last year, when two conditions were diagnosed — MODY5, or Maturity Onset Diabetes of the Young Type 5, a form of diabetes with a genetic cause, as well as a mitochondria disorder which is a form of muscular dystrophy.

“Geneticists as yet have not been able to tell if these two conditions are related,” said Patty Gast, his mother.

The diagnosis was not easily found. Gast, with his mother and father, Danny Gast, was in and out of hospitals since he was very young without getting an accurate diagnosis, she said. The family had moved to Bull Shoals from Blytheville in 1995, when Gast was 12.

He suffers from insulin-dependent diabetes, exocrine enzyme therapy, stage 2 kidney disease, renal wasting of magnesium and malabsorption of nutrients due to having part of his intestine removed.

Symptoms of the illnesses revealed themselves year by year.

“Jared seemed to function as a normal little boy except for trips to hospitals for dehydration and unexplainable pain in his stomach,” said his mother. After years of suffering the stomach pain, a mass was found in Gast’s intestine similar to a birth defect known as Meckel’s diverticulum, which is tissue left over from structures in the unborn baby’s digestive tract that were not fully reabsorbed. Removal of this mass immediately stopped the stomach pain, Patty said, but Gast continued to be weak and sickly.

Gast was home-schooled from the eighth grade through high school and was unable to finish heating and air conditioning job training, but he did complete a college diploma in wildlife/forestry conservation by correspondence. In 2006, he was diagnosed with what was thought to be Type 1 diabetes, and exploratory surgery found that his pancreas was atrophied, so insulin therapy began.

On a typical day, Gast, who is 6 feet tall and about 140 pounds, may sleep up to 18 hours. But the young man does have a great sense of humor and enjoys doing voice impersonations.

Leg pain and progressive weakness began in 2007, Patty recalls. Trips to the Cline Emergency Center at Baxter Regional Medical Center were needed a dozen times for low levels of magnesium in the blood — a potentially serious condition. According to his father, they almost lost him during one such episode.

Read the rest of the story on the Bulletin’s website by clicking here.