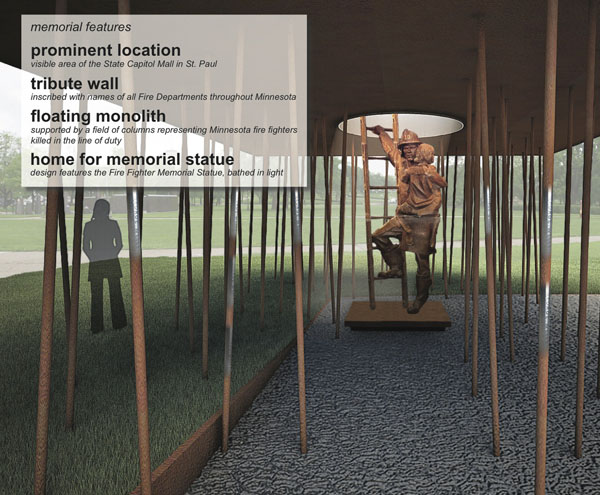 Design of the memorial

Freeborn County firefighters stepped up to help raise funds for a new memorial that will be installed at the State Capitol by next October.

President of the Freeborn County Fire Association Chuck Karl said the Minnesota State Firefighter Memorial will have names of 194 firefighters who have been killed in the line of duty — including Robert K. Edwards. Edwards was a volunteer firefighter with the Hollandale Fire Department who died Oct. 20, 1987, during a training exercise.

“It’s very deserving of the firefighters who have fallen,” Karl said.

Karl said some of the organizers of the memorial came to Freeborn County to present about it. The memorial will feature the names of all 194 firefighters who have died in the line of duty since 1881 in the state. Currently there’s a small memorial near the baggage claim at Minneapolis-St. Paul Airport, but the Minnesota Fire Service Foundation wanted a much larger, more accessible and interactive memorial.

“This will be a little more personal,” Karl said.

The new memorial will be on the grounds of the State Capitol and will cost about $500,000. Another $100,000 needed to be raised because of state regulations that anything built at the State Capitol have a maintenance fund. Donations exceeding the $600,000 needed will go to educational scholarships for children of active, retired or deceased firefighters and for spouses of deceased firefighters.

Karl said he’s proud of local firefighters for their donations to the memorial. He estimated that Freeborn County firefighters have donated anywhere from $6,000 to $8,000 to the fund.

“We donated a fair amount of money from our area,” Karl said.

“It’s an excellent idea,” Karl said. “They’ve gone through a lot of effort to do this.”